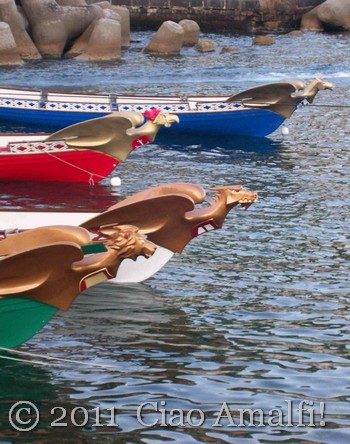 I wish it was with happier news that I was writing this morning about the results of the 56th Regata Storica delle Reppubliche Marinare that took place in Venice yesterday. No, I’m not sad that Amalfi didn’t win, or came in a close second like they did in 2009 and 2010. I’m disappointed to have to report that everyone lost yesterday, in what will likely be remembered as one of the worst regattas in the fifty-six year history of this event.

As the race was run, and by all accounts in Venice, the Amalfi team won. The team had a fantastic race, managing to pull ahead of the favored team Pisa to win by a photo finish. Surprisingly just like how Pisa won last year. Unfortunately, there were problems with the course that were contested, and problems with the Pisa team being remarkably poor losers. (They should have taken a lesson from the Amalfi team that lost by a similarly small margin last year, but in a much more respectable way.) But the more serious problems were the issues with the course. Even though Amalfi was announced the winner, it wasn’t long before not only Amalfi’s win but also the positions of the successive Pisa and Genoa teams were contested. Apparently, it was said by the Venice team that came in last, that they were the only ones that stayed on course and that the other teams should be disqualified. And that is exactly what happened. After nearly two hours of tension, meetings with the judges and the mayors of Amalfi, Pisa, Genoa and Venice, it was decided that the only result that could not be contested was just to annul the regatta. What a shame. I don’t understand in detail yet just what happened with the course or the buoys or the judging, but it seems like that is where the real problems are. My hope is that something positive can come of this in taking better steps to organize the event. And I also hope that a shadow won’t be cast over this event, which is supposed to represent the high points in the history of each of the four great sea republics of Italy.

The online newspaper Il Foglio Costa d’Amalfi has covered the event in great detail, and published an article this morning focused on who really won and who lost at this year’s regatta. (It’s in Italian, but there are videos at the end from the RAI 2 TV coverage.) They expressed disappointment that this type of debaucle had to mark the year that Italy celebrates its 150th anniversary. It is disappointing. But what is the most disappointing to me is that the all teams have to walk away from the regatta with such a bad experience, after a year of very hard work. I am sad for the Amalfi team that has been practicing so hard all winter and spring and had an excellent race yesterday.

The Regata Storica delle Reppubliche Marinare is in Amalfi next year, but I’m afraid that the bitter feeling left from this year’s regatta in Venice will likely hang over the event for many years to come.