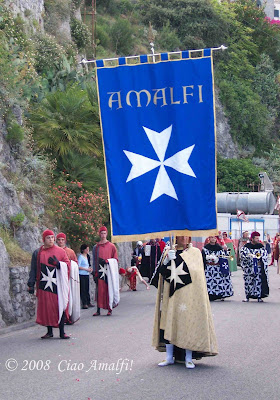 The lovely little Piazzetta di Pontone, which I promised last week I would show you today, will have to wait another week. Today is a special day in Italy called Festa della Repubblica, or the Italian Republic Day, when Italians commemorate the June 2, 1946 vote that ousted the monarchy and established Italy as a republic. Cherrye over at My Bella Vita, one of my favorite southern Italian blogs, puts it well: “And they say America is young!” Today is also a special day for the city of Amalfi, which will be battling it out on the water this afternoon against its old rivals Venice, Pisa and Genoa. Why? 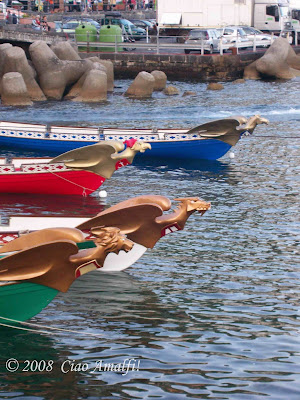 Today is the Regata Storica delle Repubbliche Marinare, or the Historical Regatta of the Maritime Republics. Since 1956, Italy’s four historic maritime Republics of the Middle Ages, Venice, Pisa, Genoa, and Amalfi, have been competing in an annual Regatta. Each city has a team of eight rowers and a helmsman who race 12th-century style boats. The event rotates between the four cities, and this year it will be held in Pisa. It should attract a huge crowd as it coincides with the Festa della Repubblica. Last year the Regatta was held in Amalfi in honor of the 800th anniversary of the translation of the relics of Sant’Andrea to the Duomo of Amalfi. (Yes, you read that correctly, the 800th anniversary. It’s just the Republic of Italy that is young!) 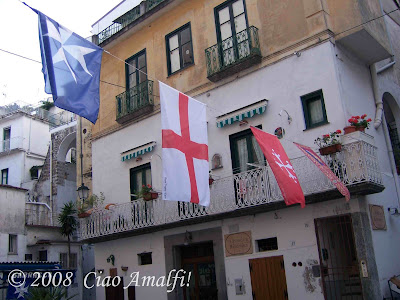 The photos is this post are from the Regatta in Amalfi last June. It is a fun time to be in Amalfi! The city is festooned with flags from the four cities, and everyone packs into the city to watch the historical parade and the race. You can read in detail on the Comune of Amalfi’s website about the history and design of the elaborate costumes in the parade. In Amalfi, the parade begins in Atrani and follows the road to Amalfi before going up the grand staircase to the Duomo of Amalfi. The most splendid part is when the procession exits the Duomo and returns down the steps. 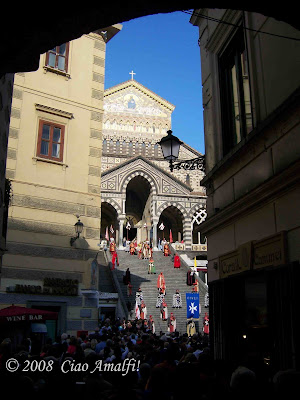 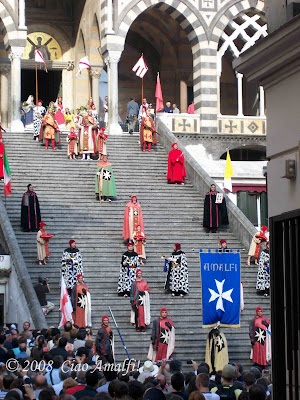 After the parade, everyone races down to the port to find a good spot to watch the race. The 12th-century style boats are painted the traditional colors of each of the cities: Venice is green, Pisa is red, Genoa is white, and Amalfi is blue. 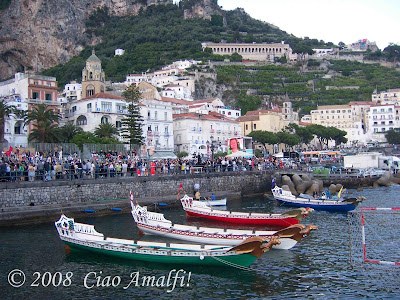 The 2000 meter race starts west of Amalfi and finishes to a lot of cheering in the port of Amalfi. Here is a video of the end of the race I made last year from my seat high up near the church of San Biagio in Amalfi:

Last year the Amalfi team encountered a problem during the race, and unfortunately came in last behind Venice, Pisa and Genoa. But it was still exciting to see! I have been watching the Amalfi team out practicing over the past month or so in the port. I snapped the photo below a couple of weeks ago when they were just heading out for practice one evening. 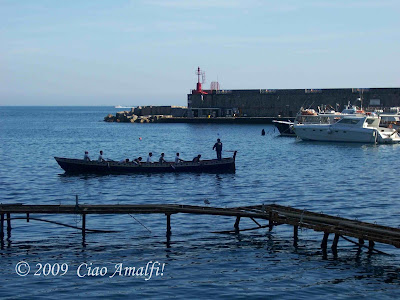 If you want to read more, the Comune of Amalfi has a nice website in English with information about the history of the Regatta. All my best wishes to the Amalfi team in Pisa today! Go Amalfi! And buona Festa della Repubblica!

Ready for Summer on the Amalfi Coast!