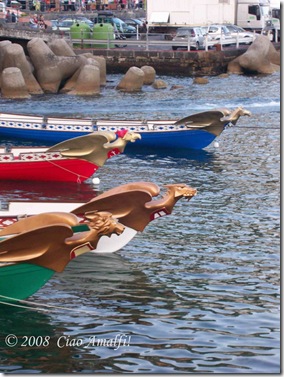 Today is a holiday here in Italy called La Festa della Repubblica, which celebrates the vote on June 2, 1946 that ended the Italian monarchy and established Italy as a republic. Many of you might remember from last year that the 2nd of June is also when the Regata Storica delle Repubbliche Marinare, or the Historical Regatta of the Maritime Republics, often takes place. Since 1956, Italy’s four historic maritime Republics of the Middle Ages, Venice, Pisa, Genoa, and Amalfi, have been competing in an annual Regatta. Each city has a team of eight rowers and a helmsman who race 12th-century style boats, which you can see in the photo above. (Amalfi is blue, Pisa is red, Genoa is white and Venice is green.)

This year the regatta is taking place in Genoa, and I’d love to be there today to see the historical parade and watch the race. Two years ago I saw the regatta in Amalfi, and it was a splendid day! You can see the photos and watch a video in my post here. But like many Amalfitans, I will be in Genoa in spirit today rooting for the Amalfi team. Forza Amalfi!!