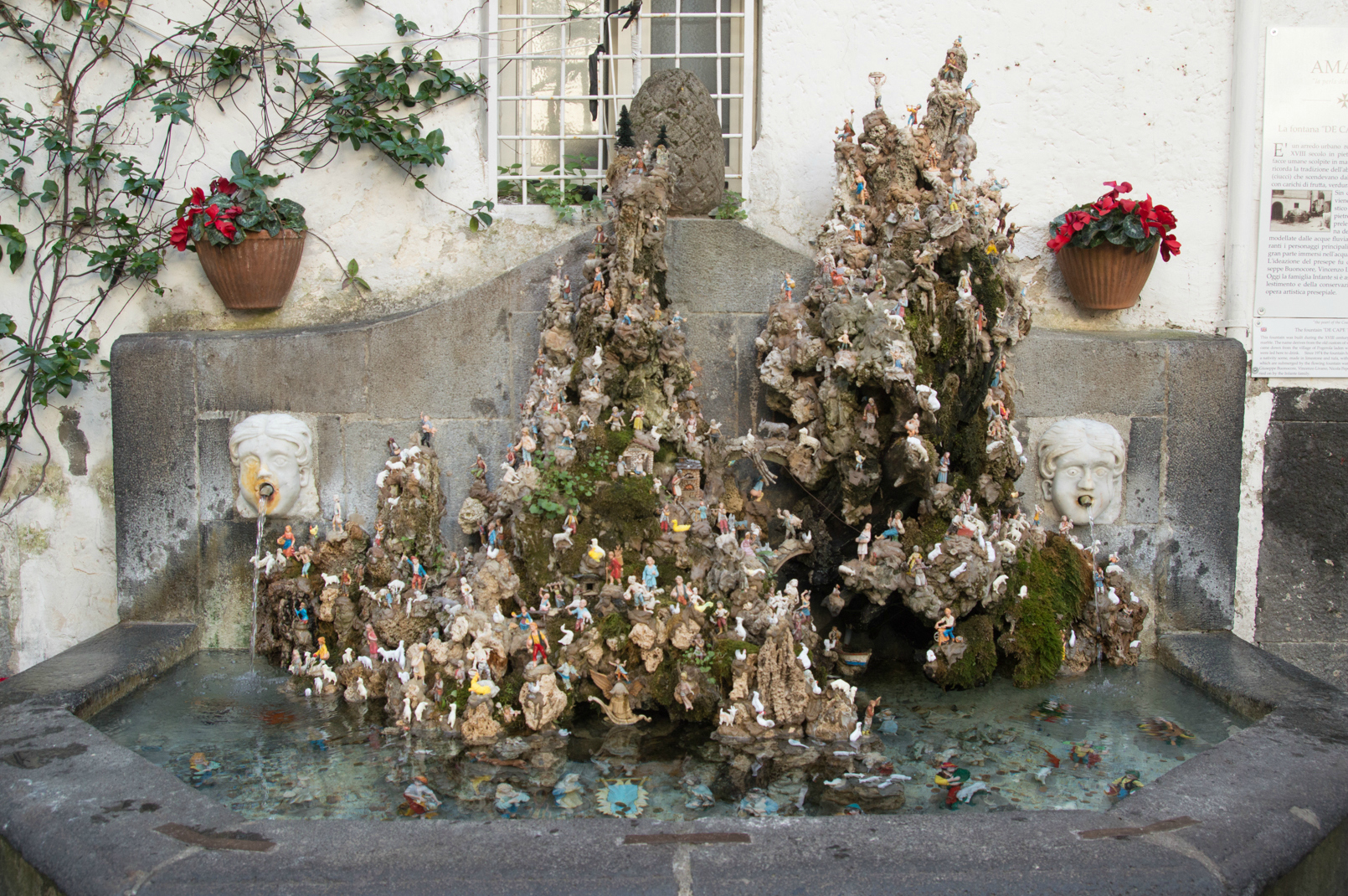 The nativity scene has a long tradition in Italy. It was St. Francis of Assisi who has been credited with creating the very first presepe, or nativity, way back in the early 13th century. While nativities can take on a variety of shapes and sizes—from a scene created with miniature figures (like ours – it’s up high safe from our cats!) to elaborate living nativity scenes—it’s hard to deny that the most elaborate, creative and, yes let’s just say it, over the top come from the Naples area. That includes the Amalfi Coast! Here a presepe doesn’t just include Mary, Joseph, baby Jesus and host of usual figures like shepherds, wise men and perhaps a donkey and an ox. In the Neapolitan tradition, you’ve got to get the whole village involved. And usually in 18th century style. So that means you’ve got not just shepherds, but whole flocks of sheep. Plus, geese, mules, rabbits, ducks, chickens – the whole shebang. Of course, if you have a village, that village has to eat. So don’t forget the butcher, the baker, (probably a candlestick maker), the fishmonger, the restaurants and because we’re in Italy – the pizzeria. The village often includes houses, churches and, well, everything you can imagine needed to run a village. In the 18th century, that is. It’s a wonderful tradition, and I love how it involves ordinary people and everyday experiences into the holy events of the Christmas scene.

In Amalfi there are several large nativity scenes that are lovingly created each year. Two of them are located in and around fountains! Here’s a look at the two fountain nativity scenes in Amalfi this year. Don’t miss the video at the end! 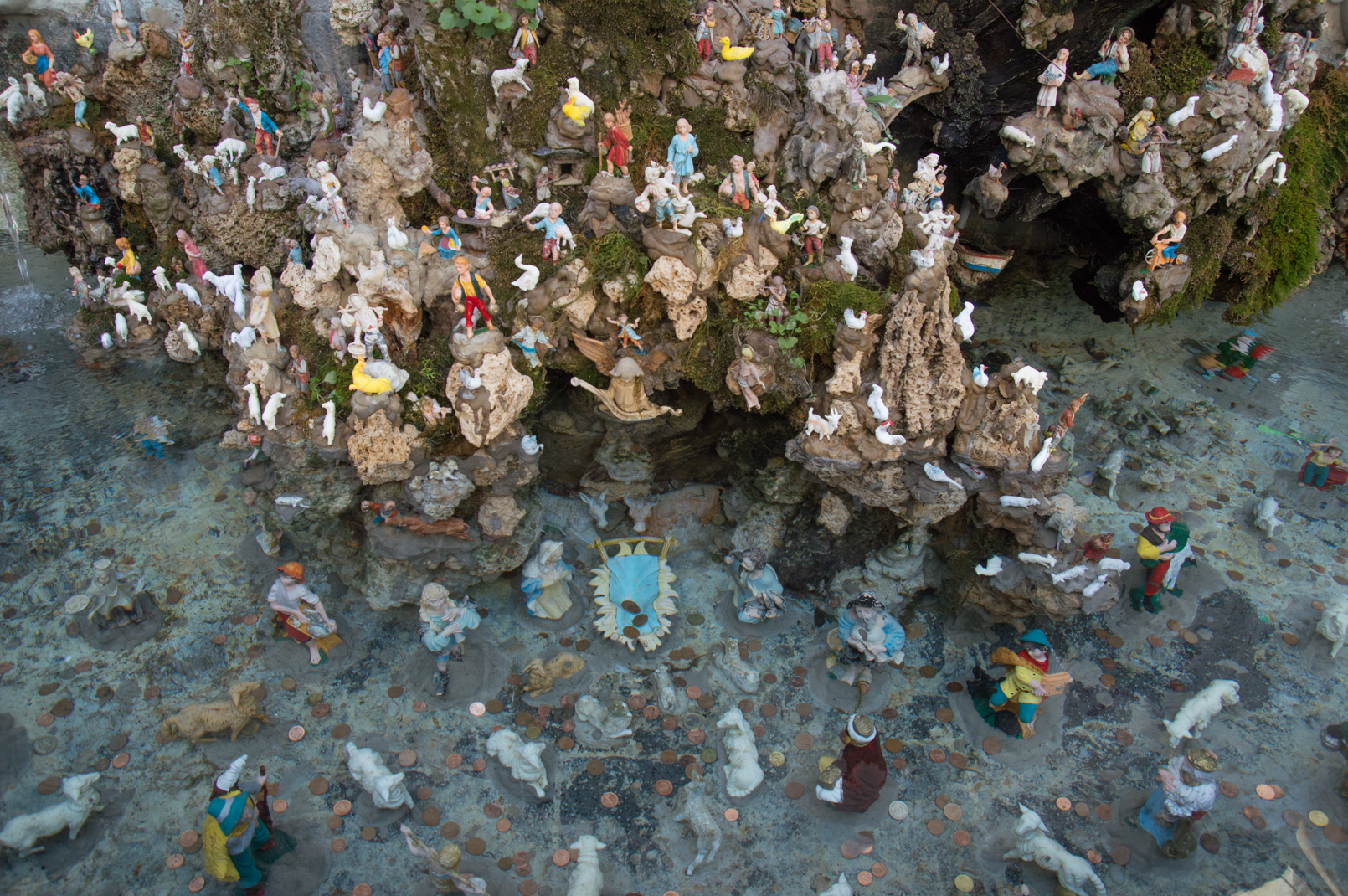 Located just off Amalfi’s main street in Piazza dello Spirito Santo is a fountain called De Cape ‘e Ciucci (pictured in the first photo at the top of this post). It was built in the 18th century and takes its colorful name from the donkeys (ciucci) that used to stop and drink there after carrying a heavy load down from the village of Pogerola high above Amalfi. Since 1974 it has been home to a presepe, which now you can see throughout the year since it usually isn’t taken down. This elaborate nativity scene is both above and below the water in the fountain, which is why in the nativity scene above you can see the central part of the scene scattered with coins. 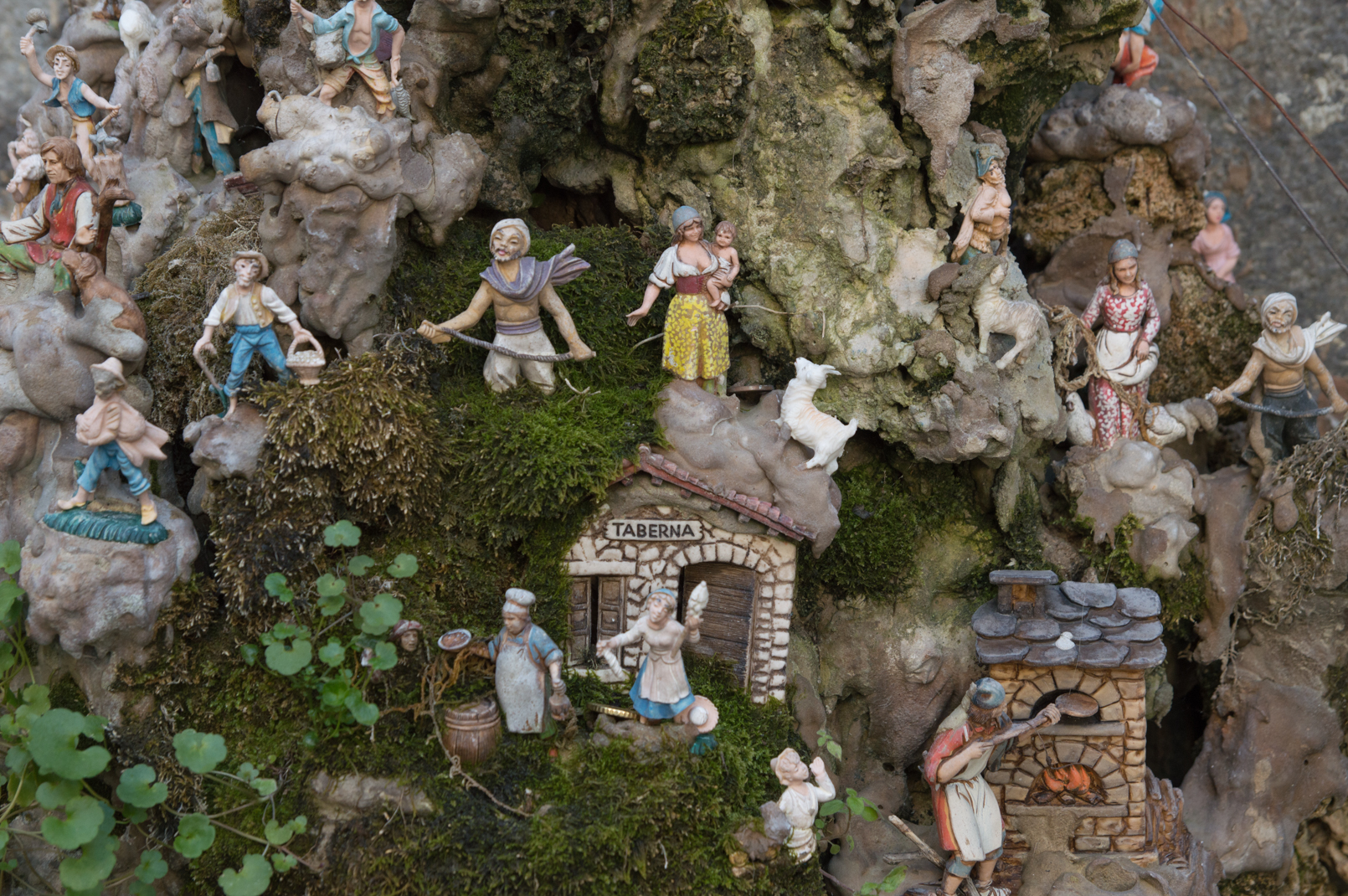 Above the water you’ll see the regular host of characters. I particularly like the pizzaiolo (pizza maker) reaching into the oven to pull out a pizza. And that woman at the Taberna got a mighty large tip! 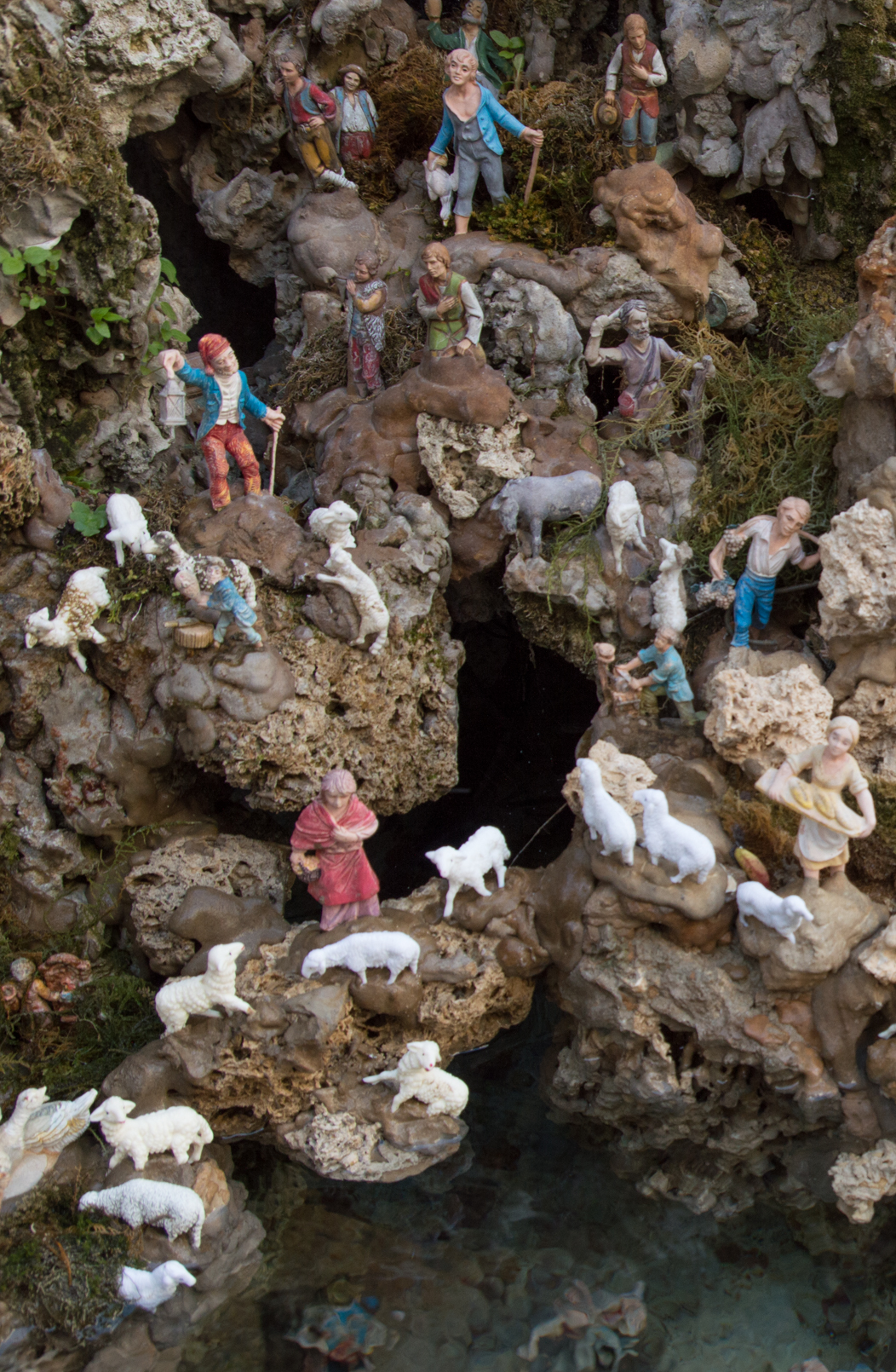 The sheep in this presepe are real mountain climbers. I don’t envy the shepherds who after look over that flock! Below water, there’s one extra character you’re not likely to see in most other nativity scenes. A goldfish! 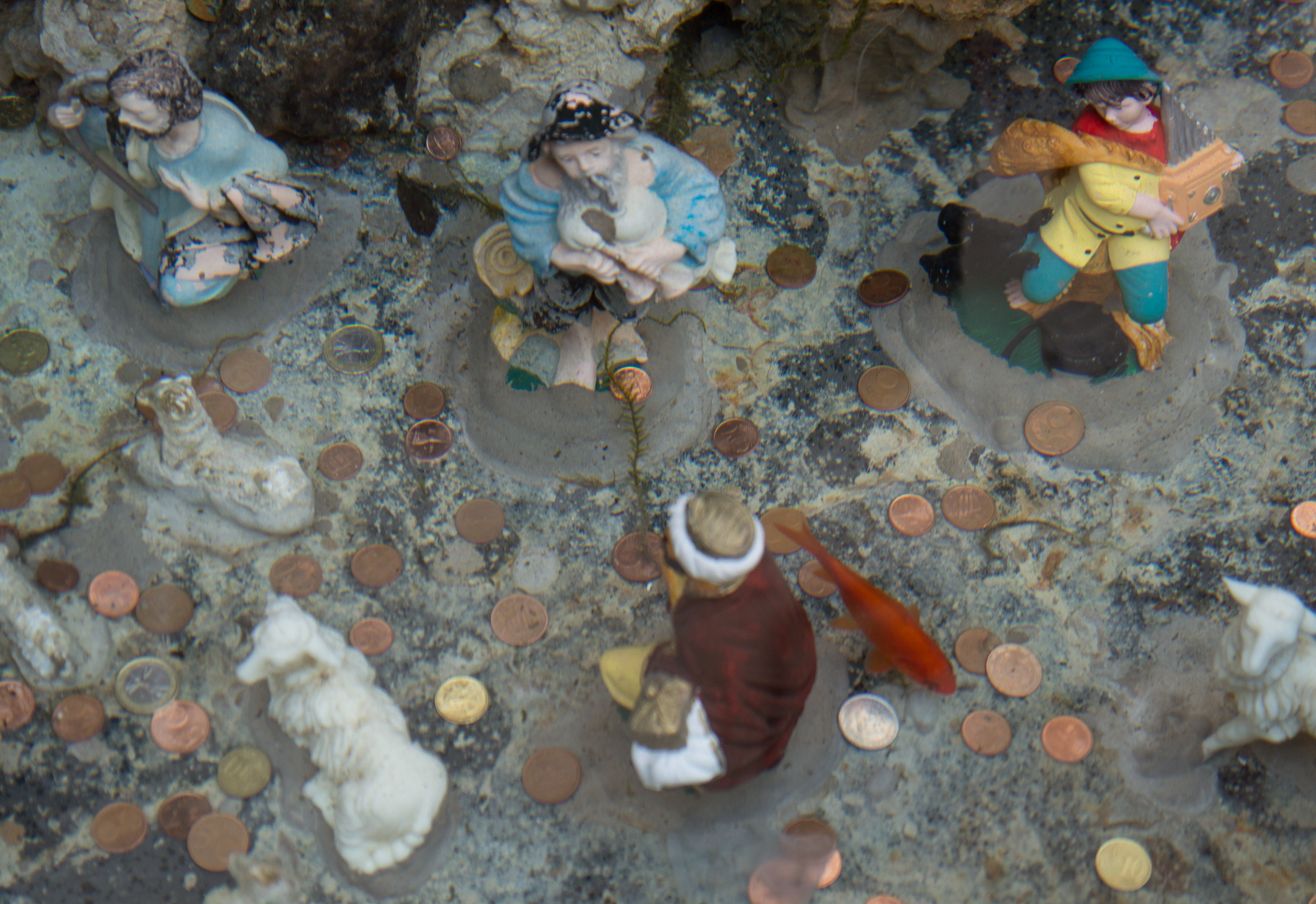 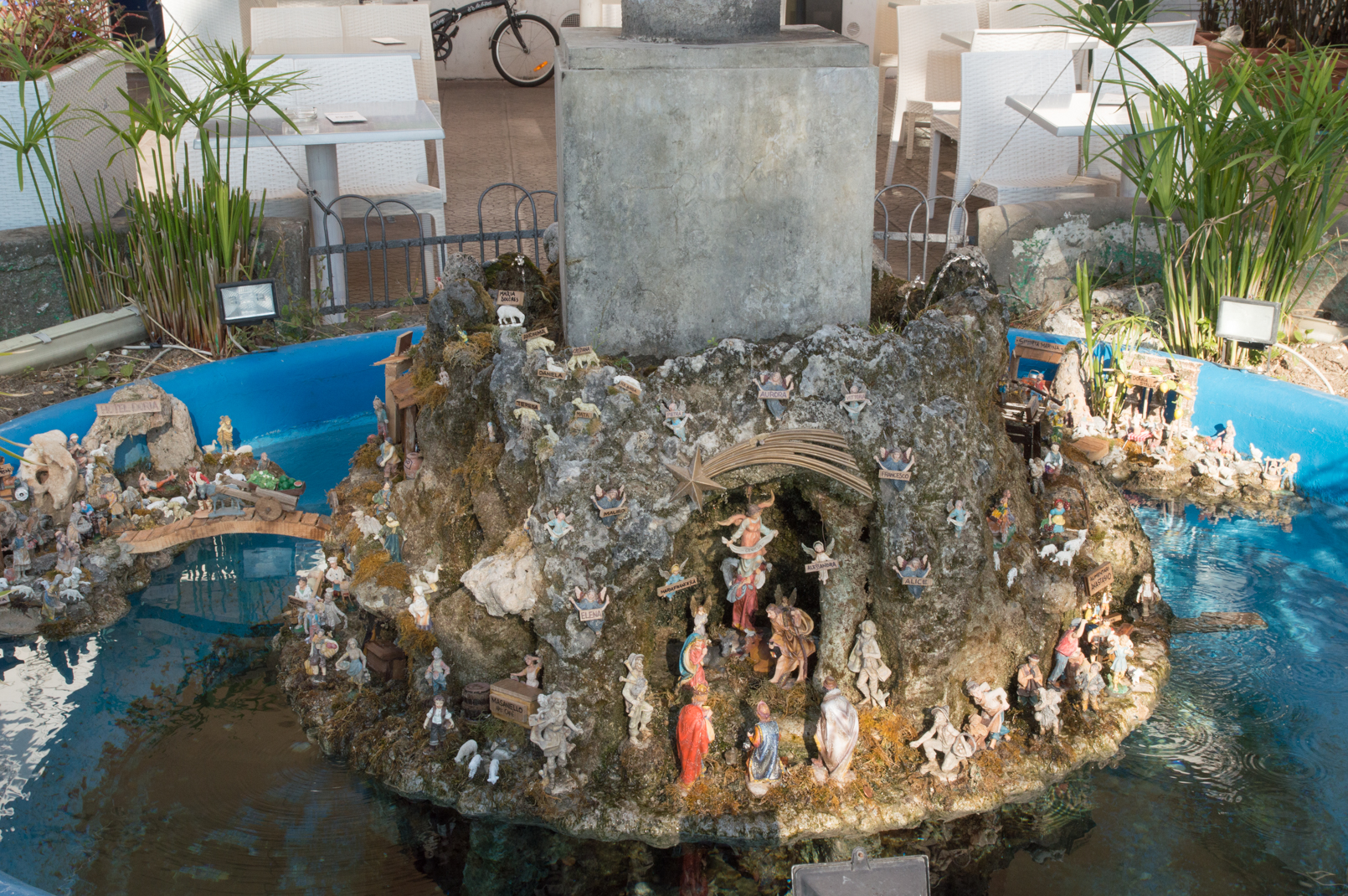 Just off the Amalfi Coast road as it goes through Amalfi is a pretty little square called Largo Scario, which is home to a fountain topped with a column and statue of the Madonna Immacolata. Usually, you’ll find the fountain full of turtles lounging around in the sunshine. For the Christmas season, the fountain is drained and the turtles transferred to a temporary and safe home. A presepe scene completely unique to Amalfi is then constructed in the fountain. This year the angels around the manger have the names of the new grandchildren in the family that creates the nativity scene – such a sweet personal touch! 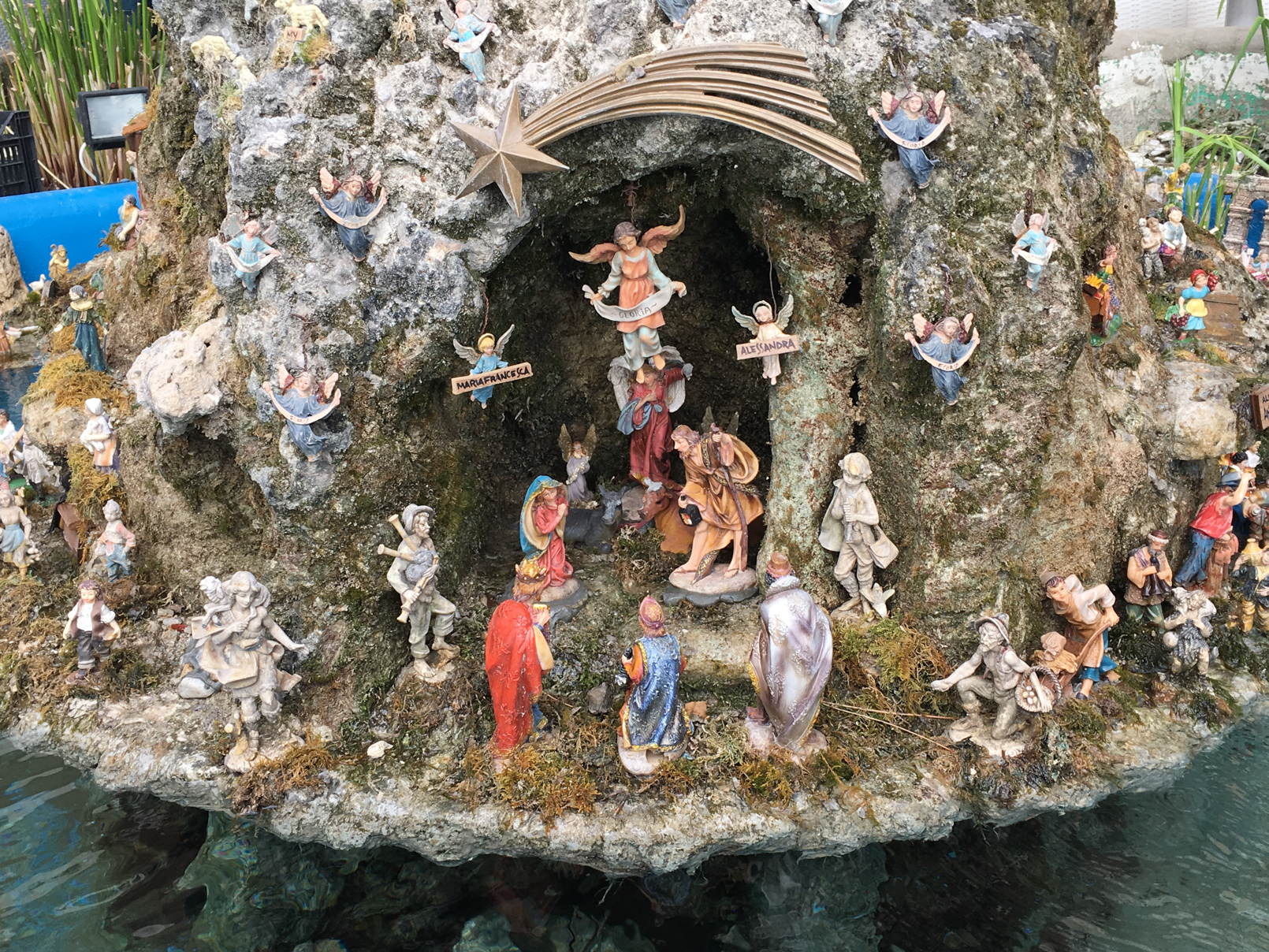 What makes this presepe so unique is that it is a representation of Amalfi. If you look close, the names of the shops and restaurants are all those in Amalfi! 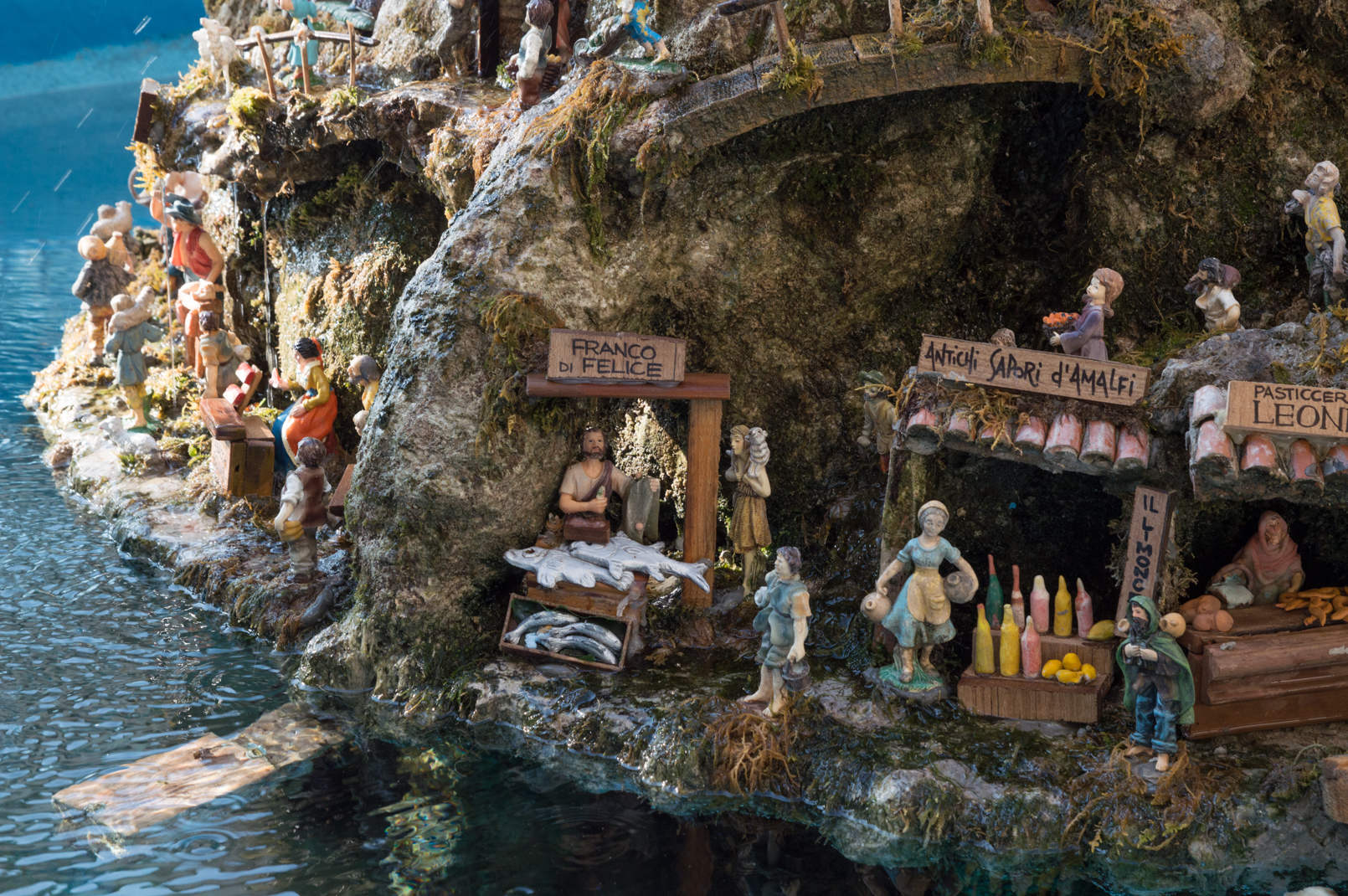 Among the shops you’ll see Pasticceria Leone, for instance, which is a great coffee shop and bakery on Amalfi’s main street. 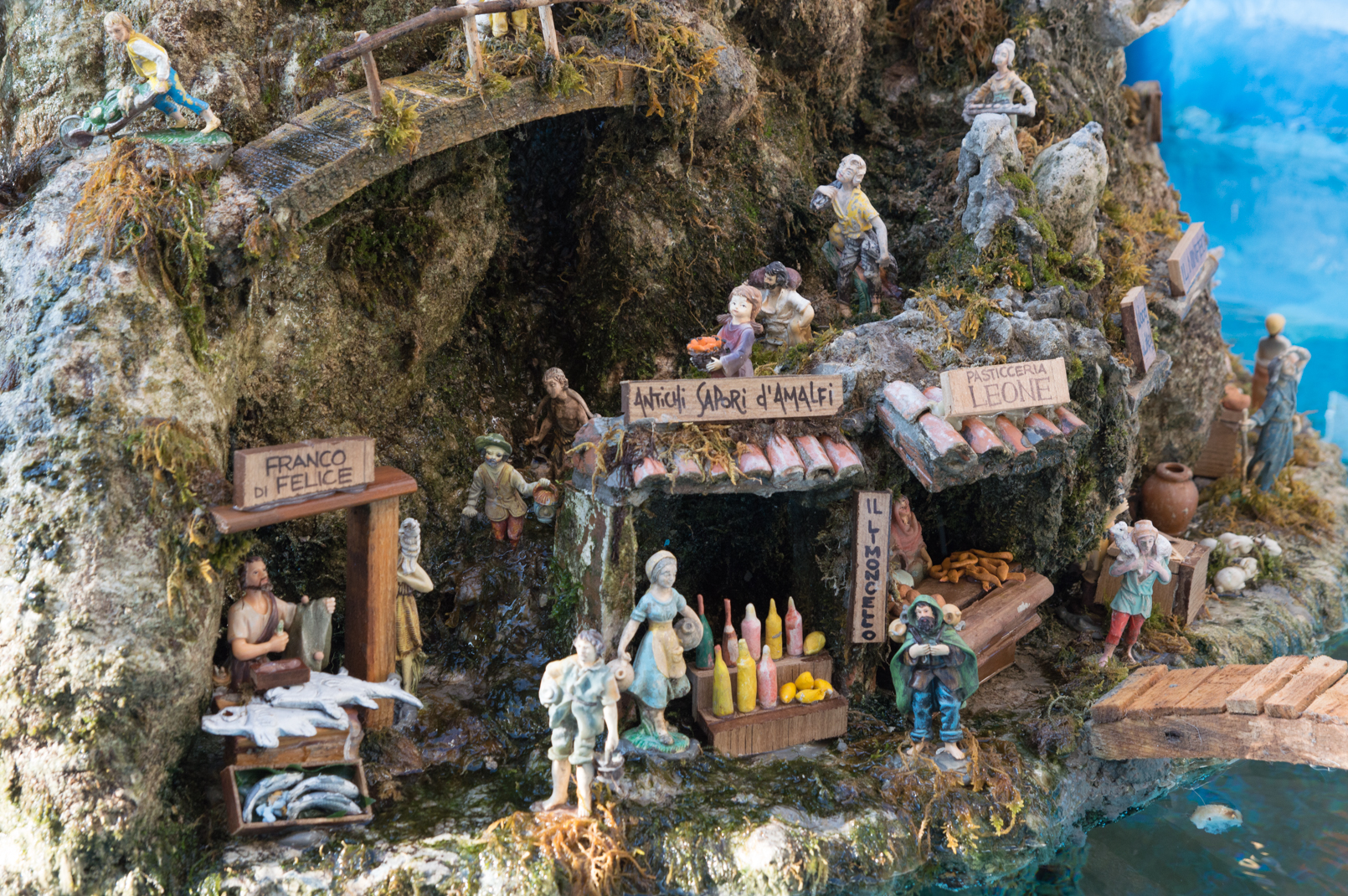 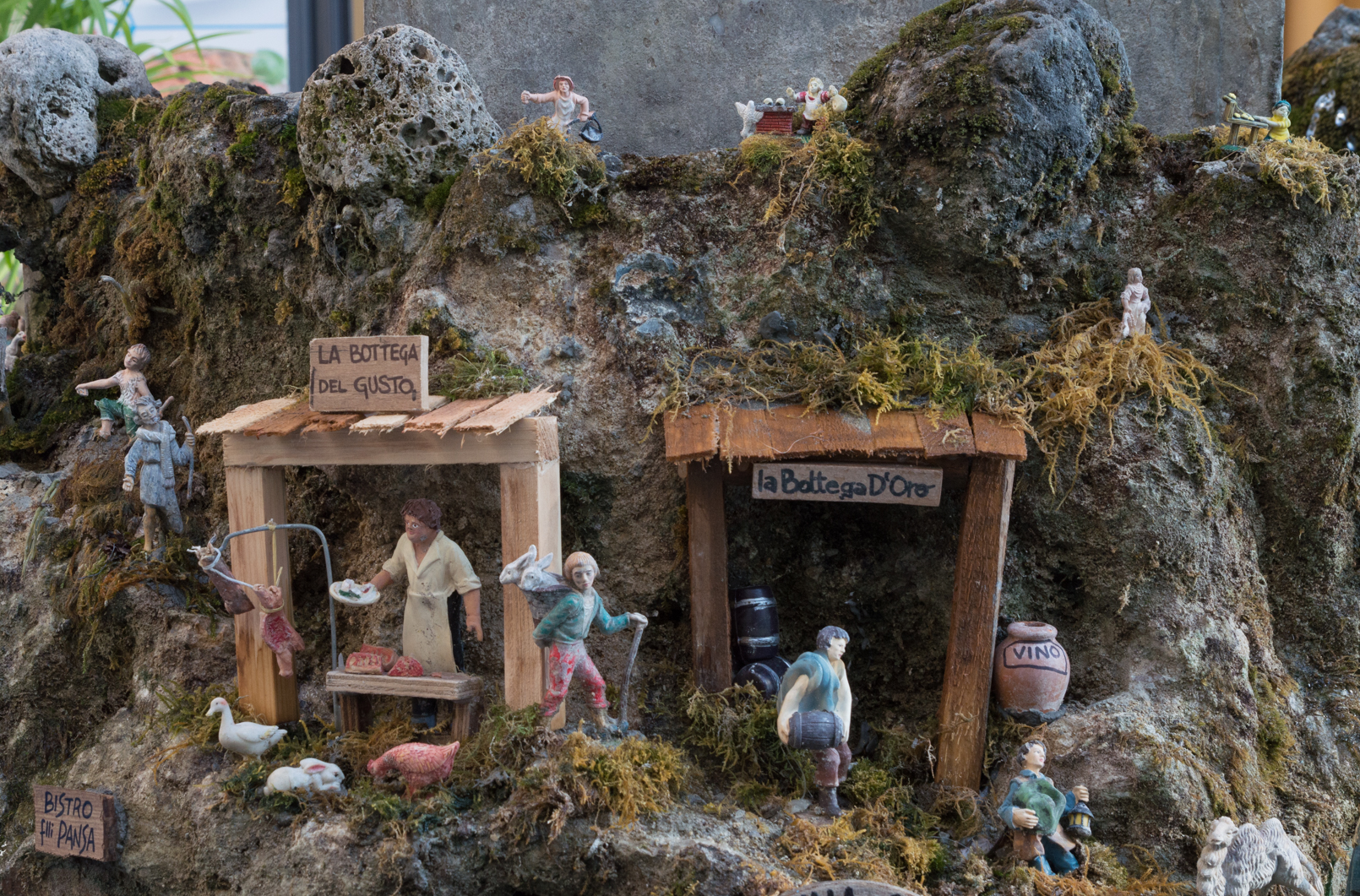 There’s also the Ristorante Marina Grande, which is located just across the street from where this fountain is located. There’s even a local painter and other characters representing Amalfi locals. 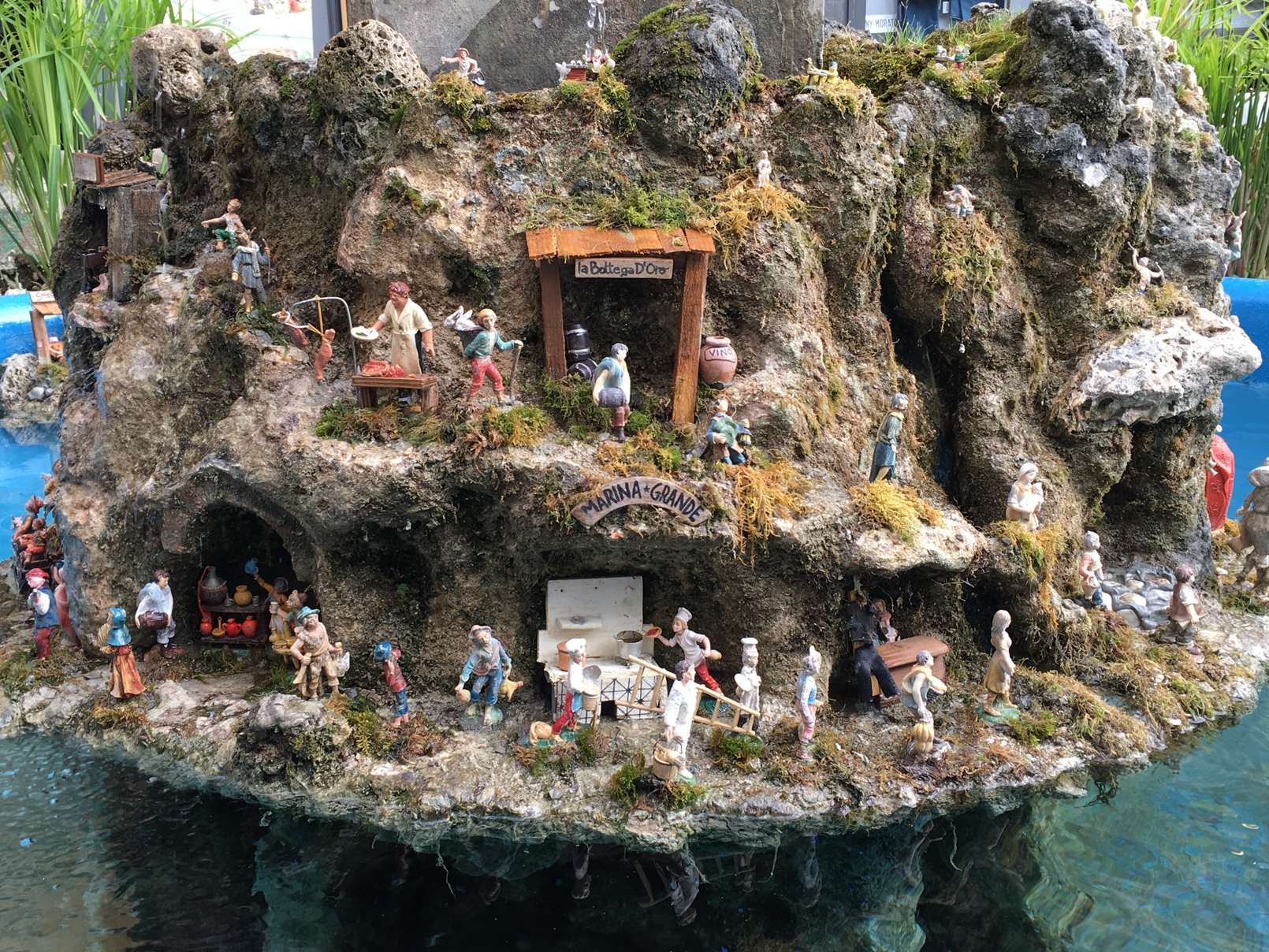 Last weekend I met up with my friend Nicki from Positano Daily Photo and we strolled around Amalfi looking at the fountain nativity scenes. She had been creating a video of the different nativity scenes that you can see in Positano and Praiano, so it was perfect! I hope you’ll enjoy seeing her video of all the different nativities on the Amalfi Coast. You’ll even spot me toward the end of the video in Amalfi! 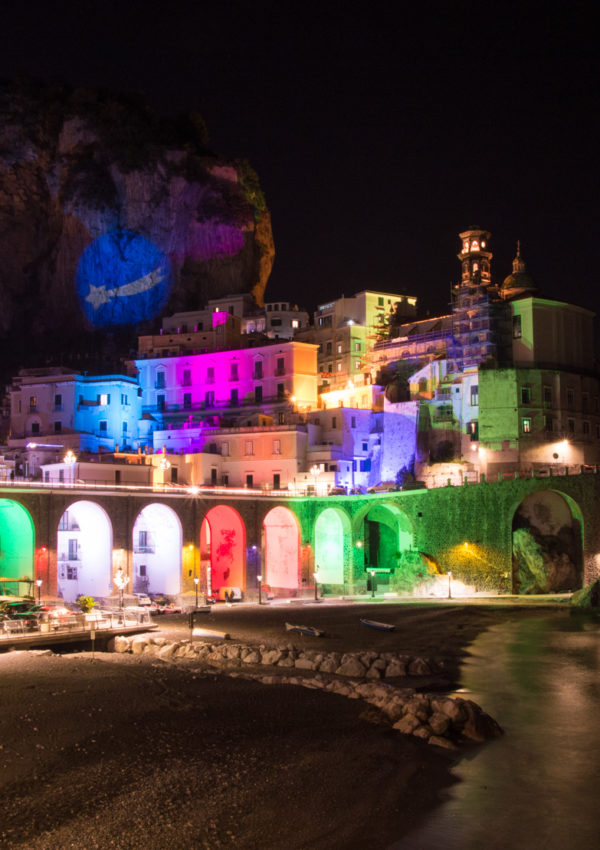 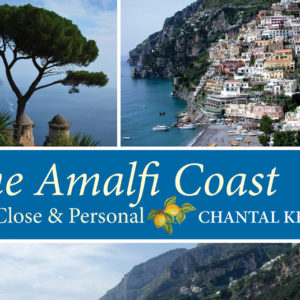