If you’ve spent time exploring the little side streets and alleys in Amalfi, you’ll have quickly learned that there are a lot of stairs to get pretty much anywhere. A lot. Late on Christmas Eve we worked off the big dinner by climbing about 200 steps to meet some good friends for a drink while waiting for midnight. What were we waiting for? No, not the new year!

After the late mass, the beautiful bronze doors of Amalfi’s Duomo are opened and a procession leads out to the top of the staircase. At midnight many churches and families across Italy celebrate the birth of Jesus by placing the bambino in the nativity scene. In Amalfi, a symbolic star is lit with sparkling fireworks at midnight and a fireworks display is set off over the Piazza Duomo in the center of Amalfi. This is the moment Christmas truly begins!

The Christmas Eve fireworks are just a tiny sample compared to what the city does for New Year’s Eve. All the stops are pulled for the most impressive fireworks display of the year on the Amalfi Coast. Wishing you all a very happy New Year’s Eve and peaceful 2013! 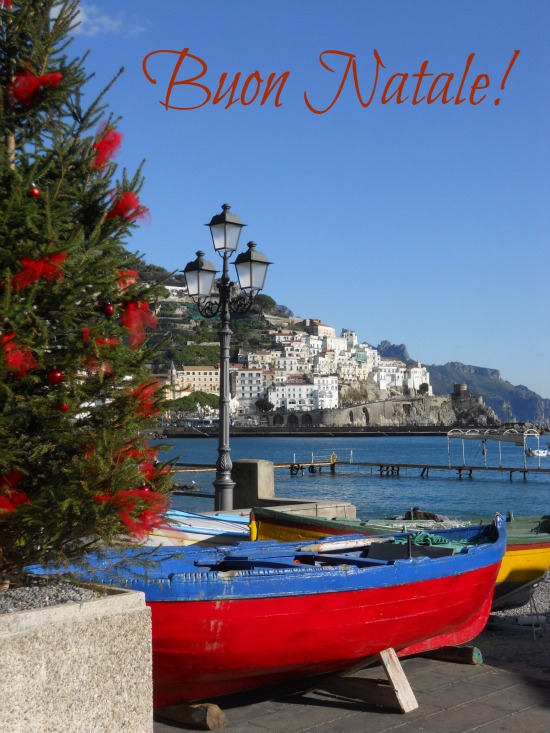 Autumn Colors on the Amalfi Coast 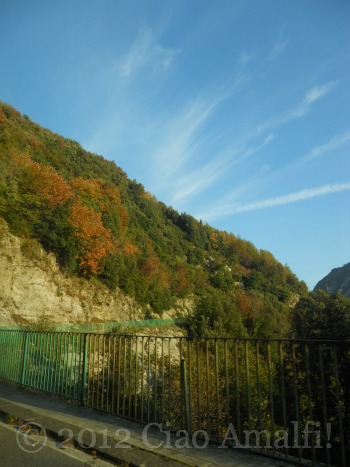 Much of the beautiful autumn colors that I look forward to each year on the Amalfi Coast have been blown away by a few big rain and wind storms. However, on the drive to the airport in Naples last week, I was happy to see some beautiful colors still lingering up in the mountains above Tramonti. I love the show nature puts on in autumn with all the bright colors! 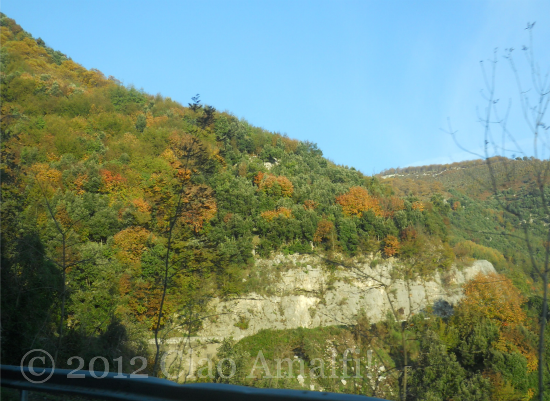 I took a few shots when I could as the car zipped in and out of the curves. It’s hard to get a decent shot, but I hope these capture at least a little of the beautiful scenery. 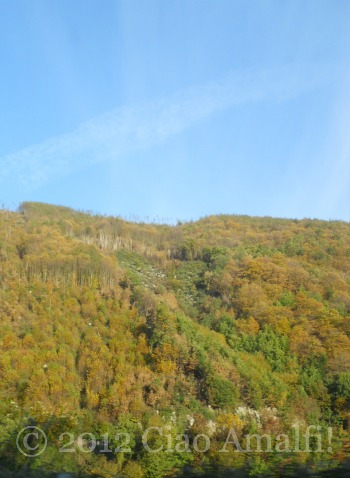 Autumn is always such a fleeting moment, but this year it seemed more difficult that usual to hold on to before it blew away. Happy to share the little bit I caught on the Amalfi Coast this year!

Happy Thanksgiving from the Amalfi Coast! 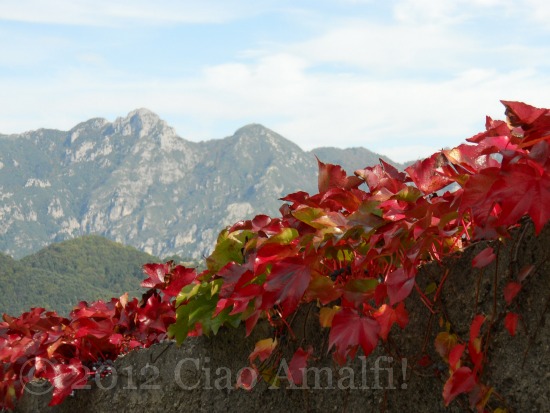 On this Thanksgiving Day we woke up to find a beautiful sunny morning after nearly a week of overcast, windy and rainy weather. What a way to start the day, with a lovely reminder of how much there is to be grateful for each and every morning! For all of my family and friends celebrating in America and around the world, may this be a beautiful, peaceful and very happy Thanksgiving!

“Live in each season as it passes; breathe the air, drink the drink, taste the fruit, and resign yourself to the influences of each.” – Henry David Thoreau

As I broke open the pomegranate and brilliant red seeds tumbled into the waiting bowl, I glanced up at that quotation by Thoreau tacked on the cupboard in the kitchen. I smiled because I had to think this is exactly what Thoreau had in mind. With red stained fingertips I picked the seeds gently out of the pomegranate pieces, every so often stealing a few to savor the sweetness while I worked. I look forward to pomegranate season all year long. When it finally arrives in the autumn, I just can’t wait to break open the first one.

My first memory of eating a pomegranate was in elementary school sitting out on the dining terrace in the hot Florida sun. There was a sweet girl in the class one year behind me who dreamed of one day becoming a doctor, a heart surgeon to be precise. I remember admiring her drive and passion way back then, and I’ve never doubted that she achieved her goals. We weren’t in the same class and only rarely met, but I liked watching her pour over encyclopedias in the library and knew we had a lot in common. She had long straight black hair, a shy smile and brought the most intriguing things in her lunch sack. That’s where, one day, she pulled out a pomegranate. It was the first time I had ever seen one, and I was so grateful she let me try some. In retrospect, I imagine she was grateful to have found a kid who didn’t make fun of her for having a pomegranate instead of peanut butter crackers or a fruit roll-up!

That was the first time I ate a pomegranate, and I often think back to when I was a kid as I work the seeds out of pomegranates now. I suppose that’s because I never ate them again until moving to Italy. One early autumn day on the bus from Amalfi to Sorrento I swore I saw a pomegranate on a tree as the bus whirled around a corner near Positano. I came home and looked up the word immediately in the Italian dictionary. Melograno is the Italian word for the tree and melagrana is the word for the fruit. I kept my eyes out for them when I visited the fruit shop, and soon enough I spotted piles of pomegranates arriving for the autumn. Now they’re one of the fruits I look forward to each year with the arrival of autumn on the Amalfi Coast.

Whatever influences pomegranates may have on me, I’m happy to resign myself to them.