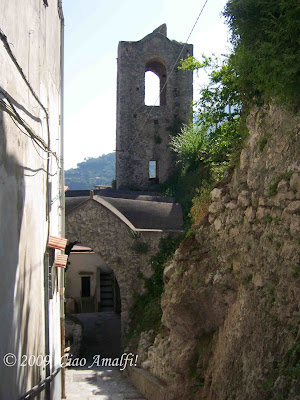 The city of Scala on the Amalfi Coast is located in the mountains high above Amalfi. Long before there was a road connecting the two cities, there were the steps. About 1,300 people say, but I haven’t bothered to count them. Some things, I have decided, are better left unknown. There are old photographs I have seen of farmers carrying their lemons and grapes in baskets on their shoulders up and down these steps to market in Amalfi. And it wasn’t all that long ago when Scala kids scampered up and down those steps every day to school in Amalfi. I met a man in Scala who said he used to make it down in 22 minutes, a good ten minutes faster than my best time. I wish I had asked him how long it took him to get home going up the steps, which is a trip I have and will continue to avoid. (Why go up the steps when they go down just as well??) 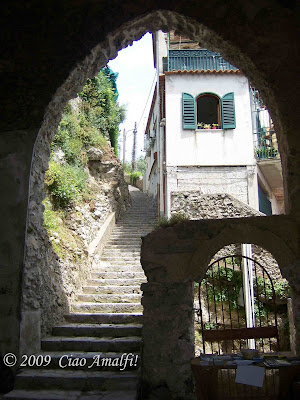 The steps on the Amalfi Coast are a way of life here. When you start exploring the areas around Scala and Ravello on foot, you quickly see how the cities were originally built around the footpaths. The architecture does not revolve around the roads like we are so accustomed to in other parts of the world. That is why you really must get out and climb the steps and explore the cities here on foot. When you take the steps heading down from Scala to Amalfi, you walk right through the atrium between the campanile and the entrance to the Church of San Filippo Neri in Pontone (top photo). Every time I walk through there I have the same feeling of amazement as I ponder the connection between the church, the city, and the neighboring houses. Everything is connected! I always knew there was something interesting to see beyond the closed doors I usually walk past, and two weekends ago I was able to find out during Scala Porte Aperte. How exciting! 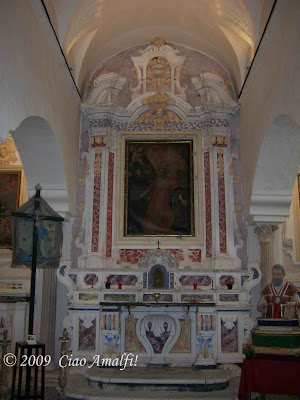 Founded during the 12th century by the de Bonito family in Scala, the church was originally dedicated to San Matteo Evangelista. Inside, the little church is divided into three naves in a most unusual arrangement of two low and unevenly spaced arches. The current Baroque decorations were added in the 17th-18th centuries when the church was rededicated to San Filippo Neri. I wish I could offer more information about this change, and about the followers of San Filippo Neri in Pontone during that time period, but there is little that I have been able to dig up at the moment. I chose this church to write about today since May 26th is the feast day of San Filippo Neri. I think the procession and celebrations for the Saint were held last weekend, since I heard church bells ringing in Pontone that I don’t usually hear. Now I know for next year to be better prepared! 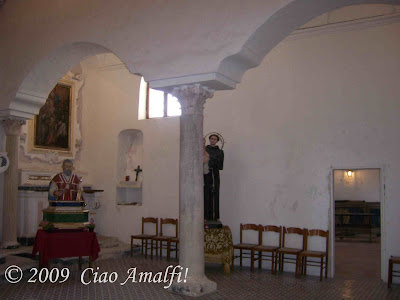 You can get a sense of the unevenly spaced arches in the photo above, which gives the interior a strangely compact and slightly unsettling feeling. 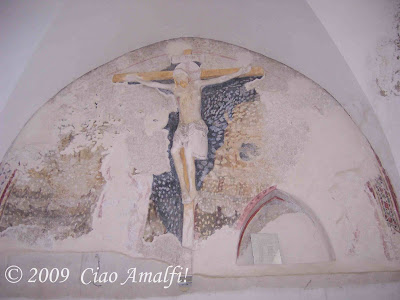 If you go through a little door on the right side of the church, you will find a chapel with a large crucifix made in stucco dating from the 14th century. 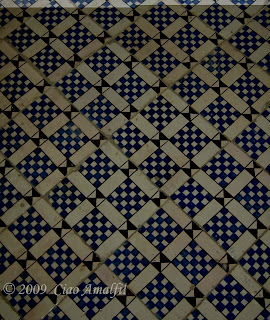 I found the tile floor of San Filippo Neri surprisingly bright and pretty. I haven’t seen a floor quite like this on the Amalfi Coast. I just love these little surprises you find in each church here! 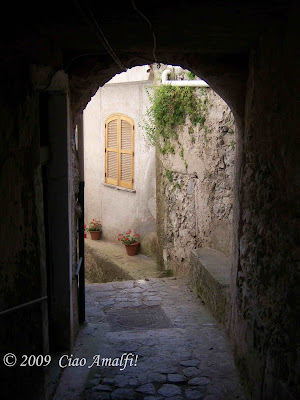 Down a few more steps on this picturesque pathway and you will arrive in the Piazzetta of Pontone, which has a lovely vista looking down the valley to Amalfi. Stop by this blog next Tuesday and I will show you what is just around that corner!