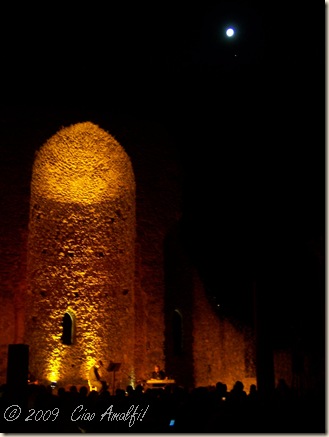 The moon, accompanied by her bright friend Venus, shone brightly over the Amalfi Coast a few nights ago. Along the moonlit and silent coastline, the ruins of the once magnificent Basilica di Sant’Eustachio tucked up high in the mountains about Amalfi were aglow. A magical night in Scala was about to begin. As I scurried down the steps to the ruins, I heard something familiar being recited. It was an excerpt of Homer’s Odyssey telling of the brave Odysseus and his voyage past the deadly sirens, long thought to have once inhabited the coastline along the Sorrento Penninsula. Thus began an enchanting evening! 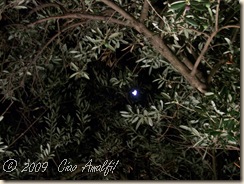 La luna through the olive trees

The event was called Il Viaggio in Italia (The Journey in Italy) featuring solo performances by great Italian singer Lucio Dalla interspersed with readings by Marco Alemanno of writings by travelers to Italy. It was held at the ruins of the Basilica di Sant’Eustachio in Scala, which I’ve written about here on Ciao Amalfi. I couldn’t think of a more evocative setting on such a beautiful night on the Amalfi Coast. After squirming uncomfortably in the pews that had been carried down the steps and placed in the church (now I know why the church that got ride of them did so), we got up and started exploring the ruins. Seeing them inside for the first time on a moonlit night with the music and recitations in the background was truly magical! 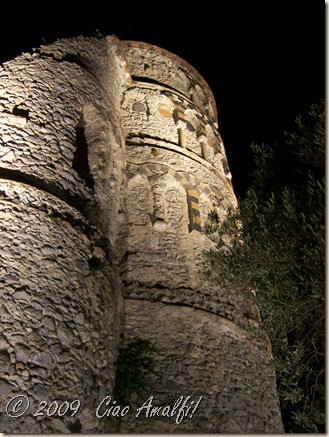 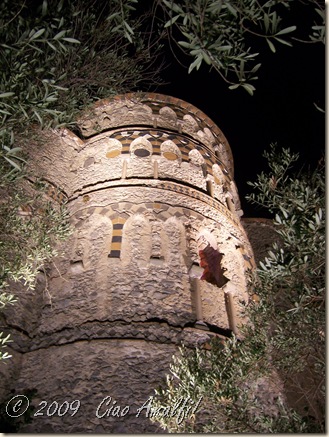 It was amazing to stand right at the base of the church and see the details so closely. I was able to distinguish for the first time the original details and what was added during a restoration to stabilize the ruins in 2002. For those architecture fans, here is a video with more detail: 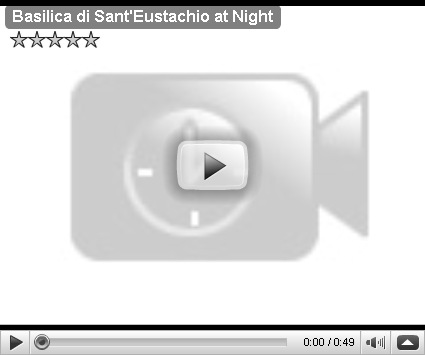 And for those fans of Lucio Dalla, here is a video of him singing one of my favorite songs called Caruso. 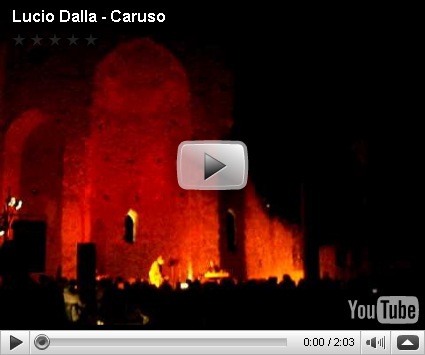 I apologize that the video is cut off, but I have a strange problem with  my camera that prevents me from making videos much longer than two minutes (or they will be stuck forever on my camera). If you want to hear the entire song, here is a moving video of Lucio Dalla performing Caruso at Naples’ San Paolo stadium.

This concert was the opening event for a conference taking place in Scala today and tomorrow called Grand Tour: Viaggio in Italia. In an area of Italy famous for its many visitors today, it seems quite appropriate to go back to the origins of today’s tourism, the Grand Tour, which brought so many visitors from across Europe to Italy in the 17th and 18th centuries. While these original tourists brought canvases and sketchbooks rather than the digital cameras of today, they marked the trail down to Naples, further south to Calabria and onward to Sicily. These were the tourists who wrote home telling of the beauty of southern Italy, its impressive historic sites, its people, culture and traditions, and who knew they had found a place at once remarkable and unforgettable. Avanti viaggiatori! Onward travelers!

Heading Back to the Amalfi Coast
Electronic System for Travel Authorization
Sunday Shout-out: The Espresso Break