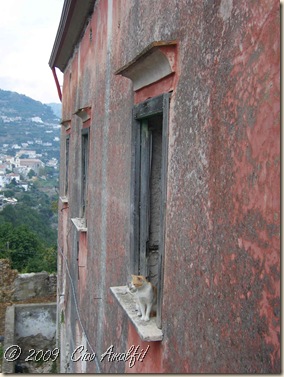 The other day while doing dishes, I was interrupted by a loud and persistent cat meowing outside. I live on the second level of a house, so it was a little strange to hear a meow from outside so clearly. I opened the window to find one of our outdoor cats named Broke looking at me from next door. (Why Broke? It’s a long story, but let’s just say it has something to do with the fact that I was a little concerned to find him peering over the edge of a second level window. “Grace” is not Broke’s middle name.) He seemed quite pleased to discover that he could talk to me from the new window he had just discovered in his explorations next door. 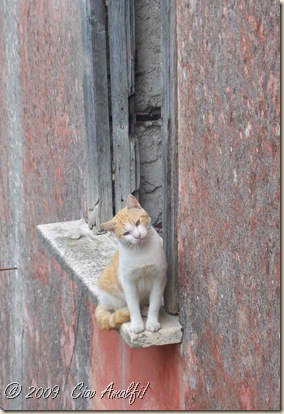 I know the cats spend a lot of time poking around what we call “the red house” next door. One day in the garden I saw Puffy on the roof! A proposito (by the way), if you know anyone  looking for a dream property on the Amalfi Coast with un sacco di soldi (boatloads of money) to spend on a restoration, I know just the house for them. Just make sure they like cats first!