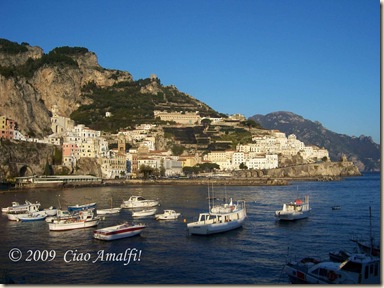 One hundred and thirty-five years ago today, the American poet Henry Wadsworth Longfellow (1807- 1882) wrote a poem reminiscing about the beauty of Amalfi. I’ve shared bits and pieces of the poem here on Ciao Amalfi, but today is the perfect day to share the entire poem.

Sweet the memory is to me
Of a land beyond the sea,
Where the waves and mountains meet,
Where amid her mulberry-trees
Sits Amalfi in the heat,
Bathing ever her white feet
In the tideless summer seas.

In the middle of the town,
From its fountains in the hills,
Tumbling through the narrow gorge,
The Canneto rushes down,
Turns the great wheels of the mills,
Lifts the hammers of the forge.
‘Tis a stairway, not a street,
That ascends the deep ravine,
Where the torrent leaps between
Rocky walls that almost meet.

Toiling up from stair to stair
Peasant girls their burdens bear;
Sunburnt daughters of the soil,
Stately figures tall and straight,
What inexorable fate
Dooms them to this life of toil?

Lord of vineyards and of lands,
Far above the convent stands.
On its terraced walk aloof
Leans a monk with folded hands,
Placid, satisfied, serene,
Looking down upon the scene
Over wall and red-tiled roof;

Wondering unto what good end
All this toil and traffic tend,
And why all men cannot be
Free from care and free from pain,
And the sordid love of gain,
And as indolent as he.

Where are now the freighted barks
From the marts of east and west?
Where the knights in iron sarks
Journeying to the Holy Land,
Glove of steel upon the hand,
Cross of crimson on the breast?

Where the pomp of camp and court?
Where the pilgrims with their prayers?
Where the merchants with their wares,
And their gallant brigantines
Sailing safely into port
Chased by corsair Algerines?

Vanished like a fleet of cloud,
Like a passing trumpet-blast,
Are those splendors of the past,
And the commerce and the crowd!
Fathoms deep beneath the seas
Lie the ancient wharves and quays,

Swallowed by the engulfing waves;
Silent streets and vacant halls,
Ruined roofs and towers and walls;
Hidden from all mortal eyes
Deep the sunken city lies:
Even cities have their graves!

This is an enchanted land!
Round the headlands far away
Sweeps the blue Salernian bay
With its sickle of white sand:
Further still and furthermost
On the dim discovered coast
Paestum with its ruins lies.

And its roses all in bloom
Seem to tinge the fatal skies
Of that lonely land of doom.

On his terrace, high in air,
Nothing doth the good monk care
For such worldly themes as these,
From the garden just below
Little puffs of perfume blow,
And a sound is in his ears
Of the murmur of the bees
In the shining chestnut trees;

Nothing else he heeds or hears.
All the landscape seems to swoon
In the happy afternoon;
Slowly o’er his senses creep
The encroaching waves of sleep,
And he sinks as sank the town,
Unresisting, fathoms down,
Into caverns cool and deep!

Walled about with drifts of snow,
Hearing the fierce north-wind blow,
Seeing all the landscape white,
And the river cased in ice,
Comes this memory of delight,
Comes this vision unto me
Of a long-lost Paradise
In the land beyond the sea.

With suitcases packed, I will very soon be reminiscing about Amalfi just like Longfellow as he ended this poem. I do hope not to be “walled about with drifts of snow,” but it is still winter time in Nebraska. I’ll be posting stories, photos and videos from the Amalfi Coast while I am enjoying time with my family in America. After all, like many of you who read Ciao Amalfi, my heart will always remains in this Paradise, in this beautiful “land beyond the sea.”

Ciao Amalfi!
Tempting Tuesday: Summer Reds on the Amalfi Coast
Out & About: Olive Trees Above Amalfi