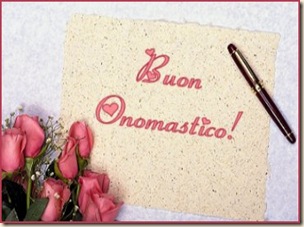 Today is my onomastico, or name day, here in Italy. You didn’t know today was dedicated to Saint Laura? That’s just fine, because no one seems to know! St. Laura de Cordoba was a Spanish Christian living under Muslim rule in Spain in the 9th century. After she was widowed she became a nun at Cuteclara, but not much is known about her life or the cult that spread across Europe after her death. She was martyred by Muslims who scalded her to death in a vat of boiling lead on this day in 864. Ouch!

Here in Italy, especially in southern Italy, one’s onomastico is a day of celebration and warm wishes from family and friends, much like a birthday. Who can complain about having two days to celebrate during the year? Onomastico is a rather strange word that intrigued me when I first saw it on greeting cards here on the Amalfi Coast. Now you know what it means if you hear people wishing one another a “Buon onomastico” during your travels in Italy.