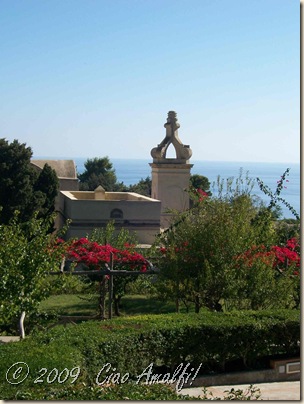 Amid one of the myriad of beautiful settings on the island of Capri, you will find this curious campanile, or bell tower, surrounded by lush gardens and backed by the beautiful blue sea. This campanile marks the Certosa di San Giacomo, a Carthusian monastery founded in 1371 by Count Giacomo Arucci, a nobleman and secretary to the lively Giovanna I, the Angevin Queen of Naples (1328–1382). It was home to the island’s powerful Carthusian fraternity, who enlarged and rebuilt the monastery after several devastating attacks in the 16th and 17th centuries. In the early 19th century the Certosa was forced to close by Napoleon’s occupying forces, and today there is a library and museum located on the grounds. 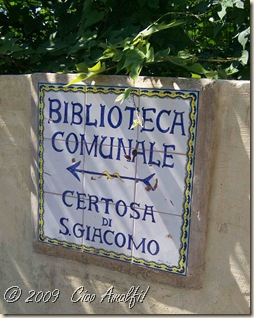 Follow the hand painted tile signs down the tree-lined walkway and into the grounds of the Certosa. One of the first buildings you encounter is the small Gothic church on the left. During my visit there was work going on inside the church, and I could only admire the portal and the view inside through the open doors. 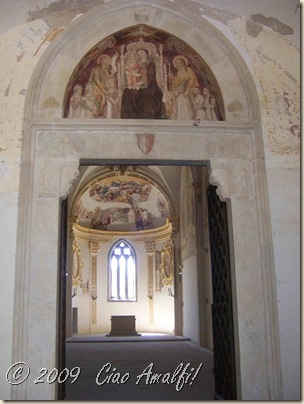 The fresco in the lunette above the main entrance dates from the end of the 1300s and depicts the Madonna and Child surrounded by the Saints Bruno and Giacomo. Below, the smaller figures on the right represent Giacomo the founder with his two sons and, on the left, Queen Giovanna with two attending women.  Just to the right of the church is the entrance to the Certosa buildings, where you will also find the Museo Diefenbach. 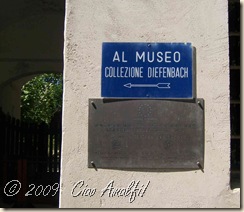 In stark contrast to the white walls and simple architecture of the Certosa, you can view the large, dramatic and often dark paintings of the 19th century artist Karl Wilhelm Diefenbach (1851–1913), who was greatly inspired by the landscape of Capri. 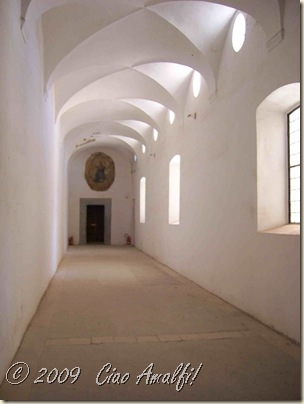 But I guarantee it won’t take long before the blue sky beckons you back outside to explore the Chiostrino, or little cloister,  dating from the 1400s, where you can finally get a good look at that curious Baroque campanile called the Torre dell’ Orologio. 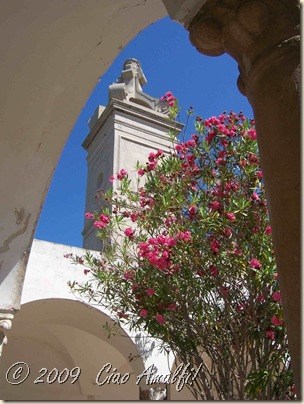 Following the hallways you will eventually find your way to the Chiostro Grande, or the large cloister, dating from the end of the 16th century. This was the heart of the Certosa, and is surrounded by individual rooms that were once home to the resident monks. Today walking around the cloister the only sounds you will hear are the stones crunching underfoot and the sweet songs of the island’s many varieties of birds. 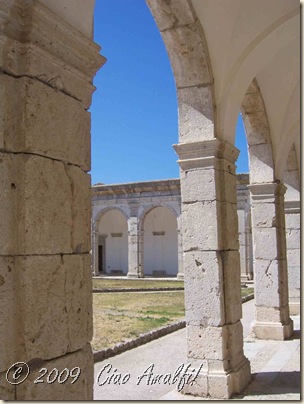 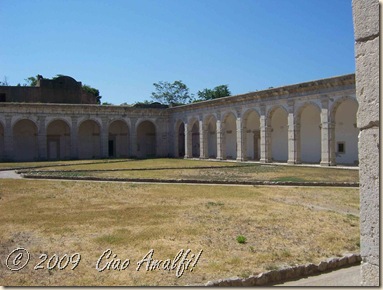 Although one of the most important examples of Caprese architecture, the peaceful and well-kept grounds of the Certosa di San Giacomo are visited by only a few of the mobs of tourists who regularly arrive on the island. It is open from Tuesday – Sunday from 9 am – 2 pm, and admission is free. A walk through the grounds, including the cloisters and museum, doesn’t take long, but it is well worth it to see the architecture, beautiful views, and absorb the sense of calm and quiet inside. 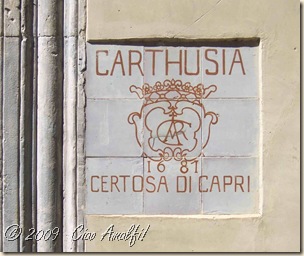