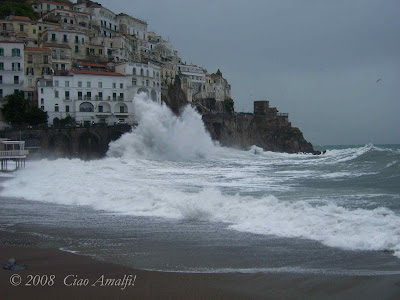 Yesterday brought with it some nasty weather, or what is called maltempo in Italian, to the Amalfi Coast. It woke me up at about 1am in the morning, kept me awake most of the night, and was still going strong yesterday evening. This is the sort of wind I experienced growing up on the Atlantic Ocean in Florida when tropical storms and hurricanes would pass nearby. Spending most of the day inside, watching the trees perform strange contortions in the wind, I had some time to think about the wind . . . Il vento.

When I first came here, I heard people talk about scirocco winds and winds coming from Africa and Libya, but it took me awhile to learn what they really meant. I remember the first time someone pointed out that the sand on the car was from Africa. Really? How strange! What are called the scirocco winds are the strong southwesterly winds that carry sand all the way from the Sahara desert. After the rain that comes with the scirocco winds, I have to clean the sand off the outside of the windows and douse the windshield of the car with water from the fountain in town.

The libeccio winds often mean trouble in the winter. These winds come from the southwest and can cause rough seas and violent storms. This is often what brings the large waves that crash against the section of Amalfi you see in the photo above. Given Amalfi’s situation, it is also the wind that brings the damaging waves to the port. The wind and rain storm yesterday came in from the southwest very quickly and brought with it more damage for Amalfi. The guard railings were ripped right off the sidewalks next to the port where the SITA buses stop. It was dark when I was down there yesterday evening, and the waves were still too large to investigate closely. So much for the work that was underway repairing the damage from the last storm! 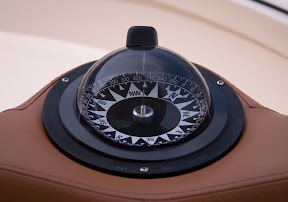 During the night, the wind made what people here call “the tour of the winds.” When I went to sleep last night, the libeccio winds were still blowing from the southwest. This morning, however, the wind was blowing from practically the opposite direction. It had changed overnight to what is called the tramontana and the gregale winds. The tramontana, literally “from the mountains” in Italian, is a pure north wind. This time of year it is a cold wind, but in the summer it brings cool breezes from Agerola down to Amalfi. Right now the wind is coming more from the northeast, which makes it a gregale, and it is very cold!

Those are the types of winds I hear about the most here on the Amalfi Coast, but there are names for winds from every direction. Here you go:

All this talk of wind has reminded me of the best windy story I have read or heard about recently. Michelle, from the fabulous Bleeding Espresso blog, has simply the best story about the strong scirocco winds in southern Italy. You hear people talk about the power of the wind, and let me tell you, there was some strong wind blowing in Calabria that day! What a lovely story!

Out & About: Baby Bibs in the Amalfi Sun
Tempting Tuesday: My favorite beach on the Amalfi Coast
La Festa del Sole