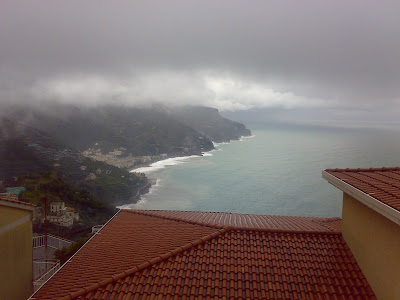 And still it rains! It has rained so much in the past month that things are starting to go a bit downhill here on the Amalfi Coast. Unfortunately, I mean that literally. The unrelenting rain is causing walls and terraces to crumble into the roads, and in some locations mudslides are causing more serious damage. The road connecting the coast to Salerno through Vietri sul Mare was closed earlier today due to rocks and mud in the road. The sea is quite rough here, as you can see in the photo above that I took quickly on my phone earlier today. The waves down in Amalfi were impressive and powerful, and I think I saw just about the biggest wave in my life today as it crashed against the watchtower in Amalfi. Unfortunately, there is very sad news on the Amalfi Coast this evening. There was a woman from Naples who was killed today on the beach in the city of Praiano. She was on a walkway tucked into the rocks alongside the sea when a large wave crashed against the shore and pulled her out. It is a very tragic story, and an important reminder of the power of the sea.

Sunshine After the Snow
Stormy Weather
Howdy from Nebraska!

An evening passeggiata in Maiori