I love photographing the vibrant colors of spring on the Amalfi Coast. They change from day to day depending on the weather and what plants are blooming. Recently it seems that Atrani has been the subject of my photos more often than not. I just had to share them for all the readers with happy memories or a special connection to this beautiful village. It certainly is photogenic!

A quiet May morning on the beach in Atrani

The sea turns strange colors after a storm, almost the same turquoise and green on the small wooden boat I caught being rowed toward the shore in Atrani. I wondered where these two had been that morning. 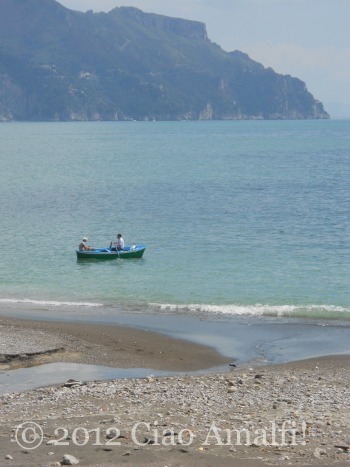 A colorful boat rowing to shore in Atrani

There are lamps along the walkway overlooking the beach in Atrani. Each one has three lights supported by an ornate design. I like the way they look with their twists and turns and curves standing out starkly against the blue sky and the sea beyond. It’s almost strange to think that soon this beach will be covered with blue and white striped beach umbrellas and sun beds all lined up. But that’s just as much its identity as the smooth black sand dotted with white stones is during the winter months. 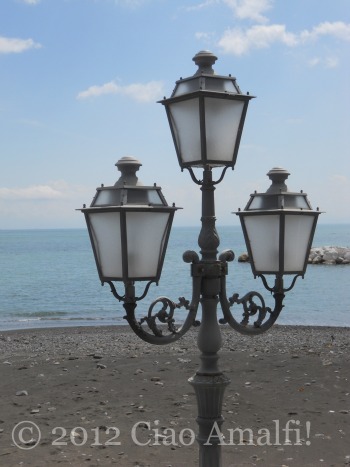 Ornate lamp near the beach in Atrani

Another sunny day after storms, I spotted a plant covered with tiny yellow flowers, and the colors stood out so beautifully with the bright turquoise sea. 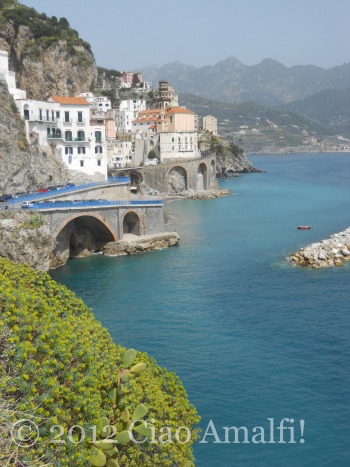 A burst of yellow looking toward Atrani

The shape of the yellowing flowering plant, the cacti poking out and that intense blue were so irresistible that I had to stop and take a few shots.

Just beyond I spotted a fig tree clinging for its life to the cliff edge below the road. It must be thriving on the views, I thought, because there wasn’t much else! Looking close you can see how big the figs have already grown. It’s not a bad view after all. 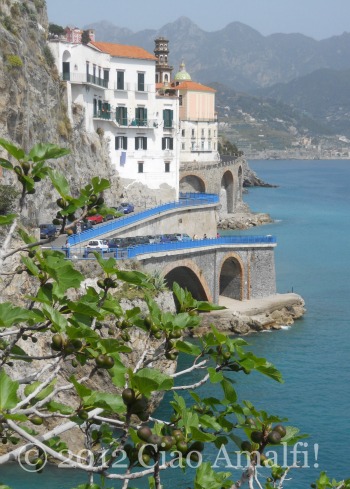 The figs are already getting big!

The seasons are changing and I know the warm weather will be here very soon. Summer brings many good things with it, but I’m trying to hold on to the colors, scents and beauty of these vibrant spring days for as along as I can!

What is it ... a bird? a plane? a spaceship? It's PlanetSolar - the world's largest solar powered boat!

As my eyes scanned the familiar view across Amalfi’s harbor, they stopped at something with a large, flat top docked on the opposite side. “What is that?” I asked my husband as we stood there squinting into the sunshine. “It looks like a spaceship landed in Amalfi,” I said. And with that there was nothing else to do except to take a stroll along the harbor to check out just what had landed in Amalfi. As we got a closer, it was the oddest looking boat we’d ever seen.

PlanetSolar docked in the Amalfi harbor

We could see that it was a catamaran style boat, but that’s about all we could figure out. We weren’t the only ones standing around in Amalfi staring either. It’s not every day a boat like this sails into the harbor. 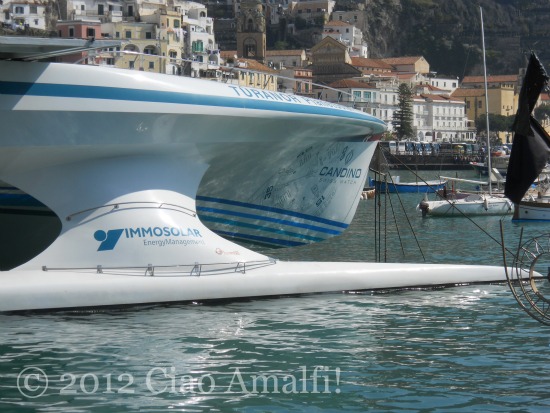 A closer look at PlanetSolar in Amalfi

It wasn’t until we climbed the stairs to the upper level of the large pier that defines the port of Amalfi that we could really get a good idea of what we were looking at. A solar powered boat!

A good look at PlanetSolar's solar panels that power the boat

When we got home I looked up the name PlanetSolar and realized we had just seen the world’s biggest solar powered boat. Those solar panels on the top of the boat measure 537 m2 and create enough energy to power everything on the boat. If that isn’t cool enough, PlanetSolar is on the very last leg of a tour around the world. Amalfi is one of the last stops before it returns to Monte Carlo. Here are the details of the world tour from the PlanetSolar website:

“PlanetSolar is accomplishing a journey around the world calling several times along the Equator where the available sunshine period is maximal. The four sailors of PlanetSolar will cross the Atlantic ocean, the Panama Canal, the Pacific ocean, the Indian ocean, and finally the Suez Canal in order to reach the Mediterranean.

The stops (Miami, Cancun, Brisbane, Hong Kong, Shanghai, Singapore, Abu Dhabi, etc.) will allow the project to increase its impact and visibility and will serve as a promotion platform for renewable energy and solar energy in particular.”

What luck that PlanetSolar arrived in Amalfi on the only day of sunshine last week! I’m not sure how long the crew intended to stay, but they arrived just in time to weather some tough spring storms coming down the coast of Italy. The sun has been peeking out between the clouds and rain today, so I hope they’ve been able to absorb enough energy to fully recharge the batteries. Despite the bad weather, the crew seems to be enjoying the Amalfi Coast.

“This place is really beautiful, it looks like the village is hanging from the cliff with its feet in the water…”

Wishing the crew of PlanetSolar fair sailing and abundant sunshine as they make their way to Monte Carlo to finish the first around the world trip with solar energy!

Something there is that doesn’t love a wall 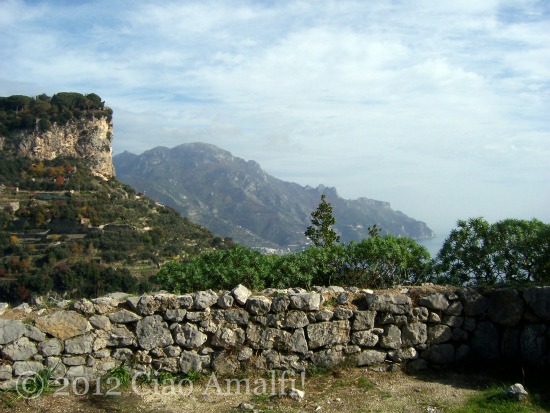 I’ve been stuck lately working on a chapter in the novel. I know, it happens to writers all the time. The writing rarely flows continuously without a hiccup here or there to slow things down. Like the washboard surfaces on the dirt roads that were so much fun to ride my bike over when I was kid, I may keep writing and writing, but sometimes the words come out with a struggle, all bumpy and hard. Other times, the words for a particular scene may not come at all, even if I know what happens next. I was mulling over the flow of writing and the idea of writer’s block the other day while making dinner. As I stirred the pasta sauce and it bubbled away, the image of a wall came to mind. Not any kind of wall, an old stone wall. The kind that used to separate farm land before modern fences and the kind that are used to build walls and terraces here on the Amalfi Coast. The kind that fall apart and need to be rebuilt. The first line from Robert Frost’s poem “Mending Wall” ran through my head, “Something there is that doesn’t love a wall.” Writers, I thought. Writers don’t like walls. 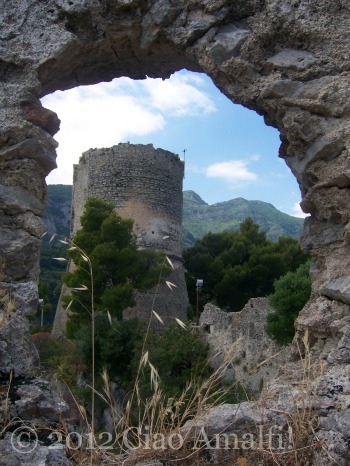 When I’m stuck, it’s often not because I don’t know what I’m trying to write or what is happening next. That’s writer’s block, for me, when you find yourself unable to describe what you’re writing or what’s happening next. I often get stuck waiting for the right words to come. I can be a frustrating experience when at other times they come so easily. But I’m not one to sit around waiting for Inspiration to arrive, and my work as full time freelance writer has taught me that Inspiration ain’t ever going to show up at your door with a project fully written by a deadline if you don’t roll up your sleeves and work hard at it.

I see these periods of struggle more like a wall rather than a block. Sometimes they fall down naturally, just like the stone walls Frost describes putting back together each spring with this neighbor. Ideas expand and swell the tiny gaps and send the walls tumbling down just like ice in the winter. Other times you can peek through a hole and find it just large enough to squeeze through and get to the other side. If that fails, there’s always the good old bulldozer. Put on the work boots and helmet, pick up the pen, and plow right on through. (It’s an imaginative wall anyway, so what does it matter how big of a mess you make?) All that matters is that you end up on the other side with some words on a piece of paper or typed on the computer. Sometimes it doesn’t even matter how good they are. That’s what editing is for, right? 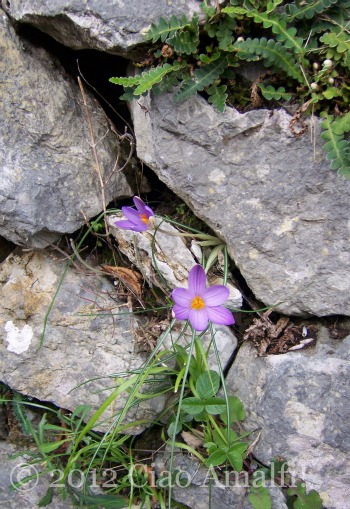 Something there is that doesn’t love a wall.

What do you do to break through walls that block your creative process? 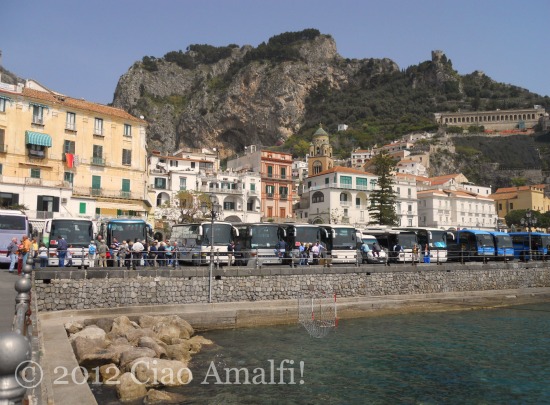 If it hasn’t started to get rolling yet, the long weekend for Easter is the official start of the tourist season along the Amalfi Coast. In the days leading up to Easter last week, the mornings were already buzzing in Amalfi. Tourist buses have started to arrive nearly every day from Sorrento, Naples and other destinations. The parking lot in the center of Amalfi reserved for the blue and green SITA public buses and the tourist buses is filling up each morning. And after a quiet winter, the harbor is filled again with ferries to Positano, Salerno and Capri and smaller boats ready to go to the Emerald Grotto or set off for private boat tours.

Where to? Positano, Salerno, the Emerald Grotto or Capri?

While the warm beach days are still a month or so away, when the sun comes out you’ll now spot a few sunbathers here and there. And, of course, those brave few who don’t seem to mind the cold water!

The first sunbathers of the summer season have arrived!

While some people might grumble and groan at these first signs of the tourist season, I like watching the city change throughout the year. We hold our breath for a moment and make a wish that this season will be a good one, for us and for all the families that in some small way take part in sharing, promoting and protecting this beautiful coastline in so many ways.

A Change of Seasons

Over the past week and Easter weekend, the weather has changed from spring to winter and back to spring again on the Amalfi Coast. After a rainy and cold Saturday, the sun peeked out for a little bit on Easter Sunday before another storm came through in the evening. I popped my head outside the window just long enough to take one photo after Easter lunch with family in Vettica. It was a beautiful moment. 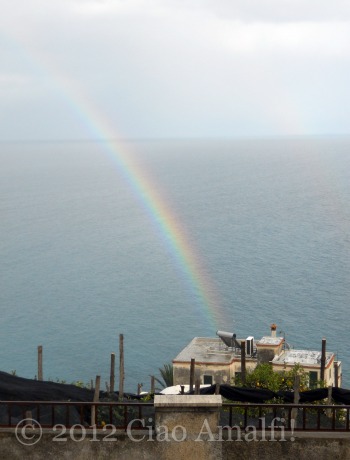 As the raindrops started to fall again, it made me stop to appreciate the beauty of spring and the change of seasons. The sunshine breaking through the clouds and forming a rainbow, a gentle rain turning the soil a deep, rich brown, the buds on the plants opening to form bright green leaves – signs of spring that seem to resonate within me more this year than usual. It feels as though a change of seasons is taking place inside me right now as I begin to walk down many new paths, in my relationship with my husband after our wedding this winter, in new writing work that fuels my passions and in a focus on finishing the first draft of the novel with my mother this year. I look forward to discovering where these new paths will lead … and to enjoying the new sights along the way. May this spring bring you new discoveries and many beautiful moments!