There are few places in Amalfi where the history of the town can be so well felt in its very stones than the Antico Arsenale della Repubblica di Amalfi – the ancient Arsenal of the Republic of Amalfi. Just a few steps from the busy traffic circle Piazza Flavio Gioia, the Arsenal is where Amalfi’s ships were constructed in the Middle Ages. It’s a fine and surprisingly well-preserved example of 11th century architecture with impressive cross vaulted ceilings and two long naves where ships were once built and repaired.

While little remains to be seen of the building’s original function, the Arsenal of Amalfi has recently been restored and re-imagined as a modern exhibition space thanks to a project organized by the Regione Campania and the Comune di Amalfi and carried out by Scabec, Campania’s in house society dedicated to promoting the region’s rich cultural heritage. To launch the new space, William Kentridge’s expansive video installation More Sweetly Play the Dance (2015) has been installed and open free to visit until December 2, 2020.

The artistic project in Amalfi has been curated by the Galleria Lia Rumma – a name to remember as it has close ties to the Arsenal and contemporary art in Italy. The long and narrow setting of the Arsenal seems designed for showcasing More Sweetly Play the Dance, which is a 15 minute long video installation that shows on eight large screens over 40 meters long. Evocative doesn’t even begin to describe the shadows and darkened vaults of the Arsenal that seem to blend right into Kentridge’s landscape for More Sweetly Play the Dance.

So what kind of dance is this? How can something so intense be described with a title using sweetly? I had a lot of questions when I walked in, but they faded away into the the background, lingering in the dark shadows of the Arsenal, as I was drawn in by the music and theatrical procession of figures across a stark landscape. The procession takes inspiration from the medieval tradition of the dance of death, both in its all encompassing sense and in the idea of dancing to keep death at bay.

I wasn’t very familiar with Kentridge’s artwork before walking into this exhibition. You only get that first impact and experience with an artist’s work once and this piece was an incredible introduction. Reading more about Kentridge afterwards, More Sweetly Play the Dance brings so much of his distinctive drawing style and energy to life. It truly is an experience and there’s no better way to get a sense of it than by hearing William Kentridge himself share about the piece and the significance of its installation at the Arsenal in Amalfi. (The video is in English and was made by Kentridge for the exhibition in Amalfi since he wasn’t able to travel here for the opening.)

The groundbreaking exhibition in 1968 that Kentridge refers to is the show Arte Povera più Azioni Povere that was organized by Marcello and Lia Rumma, two young art collectors from Salerno, and curated by Germano Celant, the art historian and critic who was the driving force behind the “Arte Povera” art movement (and who unfortunately we lost to Covid-19 earlier this year). This exhibition in Amalfi–yes Amalfi–was one of the landmark shows that brought international attention to Italy’s avant-garde contemporary artists at a key moment of creativity.

Lia Rumma has continued to be at the center of the contemporary art scene in Italy since founding her gallery in Naples in 1971. As mentioned earlier, she returned to Amalfi to curate this exhibition of More Sweetly Play the Dance to celebrate this key exhibition from 1968 and the reopening of the Arsenal.

This places Amalfi back on the contemporary art scene with a work that takes full advantage of the Arsenal’s newly renovated space. The timing, as it turns out, couldn’t feel more appropriate. Kentridge created More Sweetly Play the Dance during the Ebola epidemic in west Africa and some of the imagery in the piece certainly has a haunting familiarity about it. Here we are artistically confronted with the inescapable reality of death and yet also presented with a dance–and the music to dance–to keep that invisible source of death away.

Although the work is undeniably heavy, I left with the music dancing through my head – a melody that is somber and yet strangely catchy. It rattled around in the back of my mind for days after, the images and music blending into memories of the dark space we’re in right now around the world. Yet as Kentridge suggests, there is also resistance. And we must resist. After seeing More Sweetly Play the Dance, I left with a sense of the importance of celebrating life, and that is something to hold on to most tightly.

More Sweetly Play the Dance was scheduled to be on display in Amalfi until December 2, 2020, but was closed mid November due to Covid-19 restrictions in Campania. Nevertheless, I wanted to share more about this exhibition since I hope it is the first of many to be held at the Arsenal of Amalfi in years to come. It is certainly an exceptional setting! 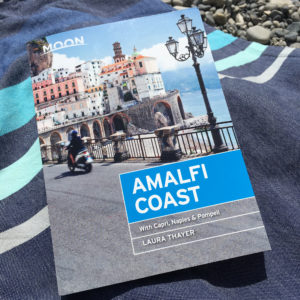