“It has been said that, at its best, preservation engages the past in a conversation with the present over a mutual concern for the future.”

The Duomo of Amalfi is sporting a drastically new look these days. Over the last few weeks, scaffolding has been slowly rising up the facade of the Duomo and is now covering nearly all of Amalfi’s cathedral. A much-needed restoration project is underway on the Duomo’s facade, which will repair damage as well as protect it for the future. And before you ask, the project is estimated to last around 9 months. So, yes, this means the scaffolding will be up through much of 2020. Although it’s hard to see it covered, our beloved Duomo of Amalfi is in need of a good dose of attention, which makes this important news on many levels.

I’ve been watching the scaffolding go up with great interest since the Duomo’s facade is one of my favorite things, as I’ve recently explained in my Duomo of Amalfi Project. Alongside my personal plan to write about the 19th-century facade of the Duomo this year, the Duomo itself is undergoing a massive project. This month the two will coincide as share with you a bit more about what’s happening with the facade restoration. Knowing that this restoration was in the works was part of the inspiration to start my own Duomo of Amalfi project.

With such an intricate design, it takes more than a cursory glance at the facade of the Duomo to reveal the issues. For some time now, many people in Amalfi, including me, have been concerned about visible damage to the mosaics on the facade and other clear indications of issues that could easily been spotted with the naked eye. So it was excellent news when the Soprintendenza Archeologia, Belle Arti e Paesaggio di Salerno e Avellino, who is in charge of historic monuments on the Amalfi Coast, received the funding from the government for urgent repairs on the facade.

Recently, I had the pleasure to speak with Lina Sabino from the Soprintendenza Archeologia, Belle Arti e Paesaggio di Salerno e Avellino who will be closely overseeing the project. While only in its initial phase, it was fascinating to hear more about the scope of the project, which is planned as a full restoration of all of the various elements on the facade. With the highly detailed design, this includes various types of stone, the mosaics, and ceramic and glass details.

Right now the project is only in the early stages of examining the facade close up, but the project will entail analyzing the situation, doing necessary restoration work, and also will take into consideration preventative measures to avoid future damage. As you can pretty easily spot in the photo above, the facade is showing signs of the environmental conditions it is exposed to, including salt in the air being so close to the sea, sun baking down in the summer, very high humidity much of the year, and bad storms in the winter with strong winds. The restoration process will also look at and repair damage caused by pollutants and other natural elements as well as include a detailed cleaning of the facade.

After the initial phase examining the current situation, it will become clearer the extent and time frame for the project. As I mentioned, it is now planned for approximately 9 months, which will cover much of the tourist season this year. Of course it will be quite disappointing and frustrating for many visitors to Amalfi this year to not be able to admire the beautiful facade of the cathedral.

To that end, there is now a large printed screen covering the scaffolding that has been laser printed with a very detailed design of the facade. Sponsored by Ferrarelle, the popular Italian bottled water company, it was produced in an ecologically sustainable manner with material that is completely recyclable.

This project is of fundamental importance to the preservation of Amalfi’s landmark cathedral for generations to come. While it is a sacrifice for all of us who will miss seeing it this year, it will be good to have this decorative screen up when it arrives sometime over the next month. I’ll be sure to share photos when the screen is up on the scaffolding.

Although I’m sure I’ll be in the minority, I am excited about this project and the much-needed attention that the Duomo’s facade is receiving this year. I will be sure to share more updates and information as the restoration continues throughout 2020. 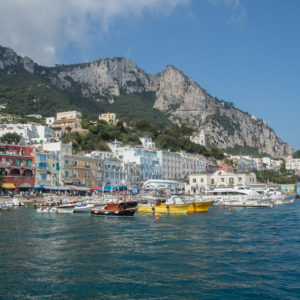 Discover the Art of Capri in Italia! Magazine