I grew up hearing the motto “hurry up and wait” often, and we did in fact do a lot of waiting when I was a kid. It was a habit passed down by my grandfather from his days in the Navy to my mother growing up on a small family farm in rural Nebraska. It’s a habit I’ve been grateful for over the years, because it means I’m rarely late and it eliminates a great deal of stress from daily life.

My husband’s motto, on the other hand, could be described as “hurry up, we’re late!” That modo di vivere (manner of living) leads to some interesting (I’m being polite, read: scary) drives along the Amalfi Coast roads. I’ve learned that not only do I not appreciate those types of drives, since I get car sick, but that it really bothers me to be late as well. While he admits my habit of getting places early is much better, it’s not so easy to change a habit of a lifetime.

With my motorino I’ve been brought back to my natural habits due to its finicky attitude to starting. Turns out that my scooter is really a lot like me in that it doesn’t much care for rainy weather, too much humidity or wind. It kind of just gurgles and says, “No thanks, I think I’d really rather say home today.” But on sunny days it starts right up happily and is ready to go. Hum. I can’t really say I blame it! So that means when I need to be somewhere at a specific time, for safe measure I leave early enough to walk or take the bus as a back up. In other words, I hurry up and wait.

Not long ago I had an appointment to get my hair cut in Ravello and it was a humid and sticky morning. Half expecting the motorino to laugh at my attempts to start it, I left with plenty of extra time. It started right up and I arrived in the piazza in the center of Ravello with all that plenty of time to spare. I could have pulled out a book and found a quiet bench, but I spotted the large main doors of the Duomo open. It had been awhile since I had been in there, so I crossed the piazza and climbed the short flight of stairs.

With the doors wide open there was plenty of light to get a good look at the intricate mosaics and detailing on the 12th-century Ambone and the 13th-century Pergamo located on either side of the central aisle down the nave of the church. Both are decorative pulpits that were once used during services at the church, and are now admired for their beautiful mosaic work and carving. The Pergamo was created in 1272 and is attributed to Niccolò di Bartolomeo da Foggia and features six columns covered with a spiral of mosaics supported on the backs of six marble lions.

The Ambone in the Duomo of Ravello dates to 1130 and has beautiful mosaics depicting the story of Jonah. The whale doesn’t look quite like we might expect today, but nonetheless I wouldn’t want to be swallowed by it!

And then all to soon it was time to hurry off to get to my hair cut appointment. Hurrying up and waiting on the Amalfi Coast can so easily be a pleasurable pastime in itself! 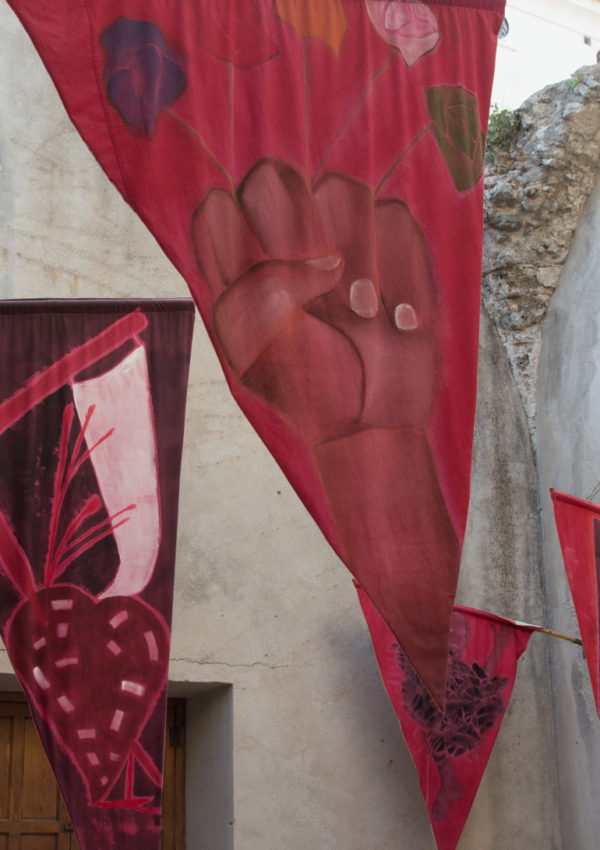