The colors of February on the Amalfi Coast are some of the most vivid and striking of the entire year. The sea in Amalfi turns a particular shade of intense blue that I’ve only noticed this time of year. It reminds me of the first time I visited Amalfi and stood marveling at that shade of blue back in February 2007. Today the sun was out and a cold wind had cleared away the rain and humidity of the past days. The little bit of white snow on the peaks of the mountains glimmered in the sunshine.

The sea was a bit choppy looking across the Bay of Salerno toward the Cilento coastline. The peaks of the mountains there are covered with snow as well after the recent winter storms. Walking toward the Hotel Luna watchtower in Amalfi, I noticed how the waves crashing against the rocks mimicked the white tops of the mountains far away. What a pretty sight to see sunshine and snow together on the Amalfi Coast! 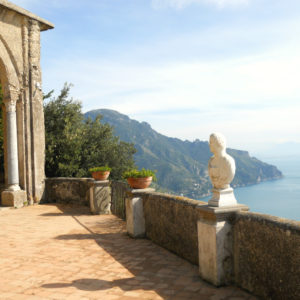 Where to Propose on the Amalfi Coast