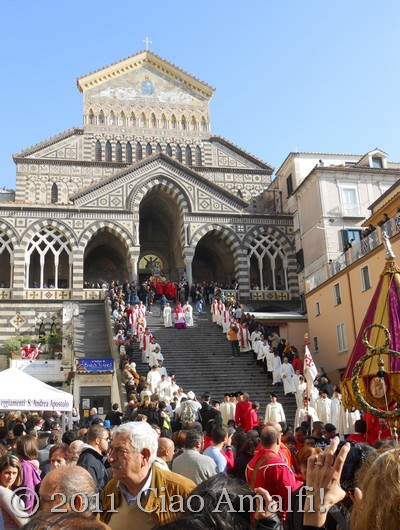 For years I have been wanting to share about the Festival of Sant’ Andrea, Amalfi’s largest religious celebration, here on Ciao Amalfi. This grand event happens twice per year in Amalfi, the summer religious festival taking place on June 27th and the winter celebration on Saint Andrew’s feast day November 30th. While the same main events take place for both, the June festival is often graced with better weather and summertime crowds. This year, however, an unseasonably nice November ended with a picture perfect sunny day and bright blue skies. As the late morning mass comes to an end, the Piazza Duomo fills with locals and visitors waiting to see the procession leave the church. The bronze doors open and soon the Archbishop Orazio Soricelli makes his way down the steps dressed in vibrant pink and white robes.

As the statue of Sant’ Andrea appears at the top of the staircase, I feels as though one collective breath is drawn in from all the people in the piazza. Slowly the men carrying Sant’ Andrea begin to make their way down the steps. My eyes are always drawn to the men in the very front who have to stretch their arms straight up to support the statue during the slow descent. As the statue nears the bottom of the staircase, applause breaks out and the marching band following the procession reaches a crescendo. Phew … safely at the bottom.

There is undoubtedly an air of magnificence about the procession of Sant’ Andrea, and it moves me to think of it happening here in this very spot surrounded by the people of Amalfi for so many centuries now. The sunlight catches on the 18th-century silver and gold statue, and you can feel the significance of this event for the people of Amalfi.  Otherwise, there is no way a statue of that value would be allowed to be carried down 57 steps of the church! The men of Amalfi dressed in the red jackets have an important job to carry the statue of their patron saint during the procession and return it safely home again. 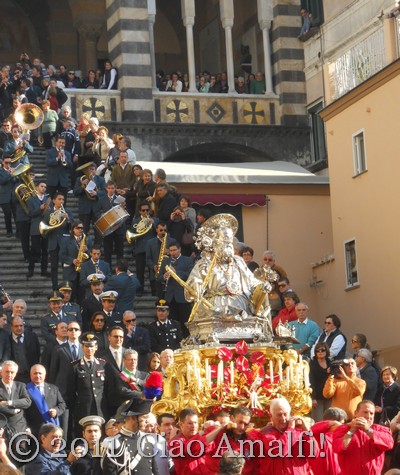 While I was jostled about a bit in the crowd, I did manage to get a few photos and a good view of the procession as it passed by heading up Amalfi’s main street. A richly colored gold and burgundy ombrellino is carried in each procession for the Festival of Sant’ Andrea. It is beautiful to see opened, and I look to try to catch the detailed embroidery  around the base of the umbrella.

As the beautiful silver and gold bust statue of Sant’ Andrea approached, the procession came to a momentary halt due to the crowded, narrow street ahead. I was able to get a good video of the statue and the men dressed in red jackets who carry the statue during the procession. There are about 15-20 men at any time, but as you can see in the video they switch out when necessary. You’ll spot some men in the front being replaced after that intense trip down the grand staircase of the Duomo.

After following Amalfi’s main street to nearly the top of town, the procession returns again to the Piazza Duomo and follows the main road through Amalfi along the Marina Grande beach. We stopped to chat and catch up with family and friends since I had just recently returned from America, but everywhere you looked you could spot people watching for the procession to pass by. 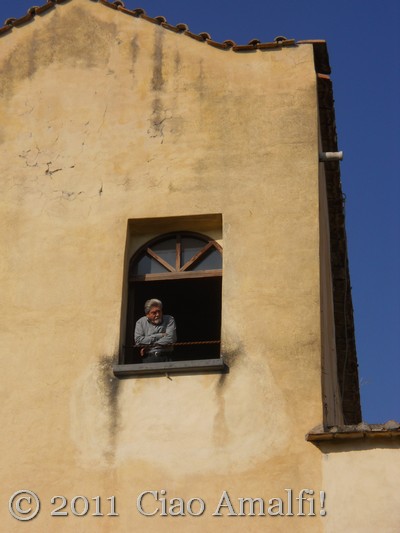 In one of its most impressive moments, the procession takes a small staircase down to the beach and walks along the water’s edge to a spot designated by the Archbishop. A blessing takes place there, which dates back to Amalfi’s fishing and seafaring tradition as St. Andrew was a simple fisherman with his brother Peter in Galilee. During the summer festival the harbor is full of boats of all kinds, from brightly colored fishing boats, privately owned boats and even some of the ferries that run up and down the Amalfi Coast during the tourist season. This November there were only a few, but they still added their bit to the celebratory atmosphere by blowing their horns again and again.

During the first part of the video above you can hear the traditional song sung for Sant’ Andrea during the procession. After the song ends, listen closely to the sound of all the footsteps falling on the beach pebbles. 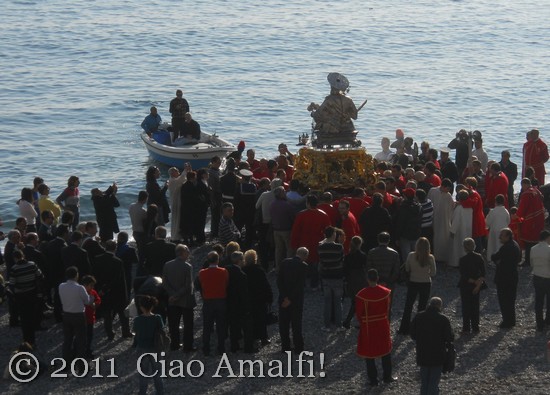 Next the procession returns to the Piazza Duomo for the most exciting part of the festival’s events – the running of the statue of Sant’ Andrea up the steps of the Duomo. This is sight you must see with your own eyes! We try to see it from a different spot each time, and this year we stopped to greet some of my fiancé’s friends who own the Hotel Centrale that is located exactly opposite the Duomo of Amalfi. We rushed to the top floor, where the hotel serves breakfast with unbelievable views, and found a little spot to watch the grand finale. 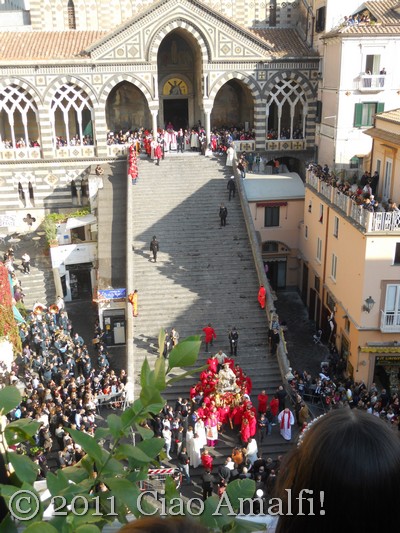 A final blessing is given by the Archbishop as the statue of Sant’ Andrea is turned to face the people of Amalfi waiting in the piazza. Then there are several minutes of tension as the men turn the statue around and prepare for the run up the staircase. I distract myself by looking across at the facade of the church to catch the mosaic designs sparkling in the sunlight. The view from the Hotel Centrale is perhaps the best I’ve ever seen the facade of the Duomo, and it made my heart happy. I shot several photos of the facade and bell tower in detail while listening to the sounds of the crowd below and the eager voices on the terrace of the hotel. 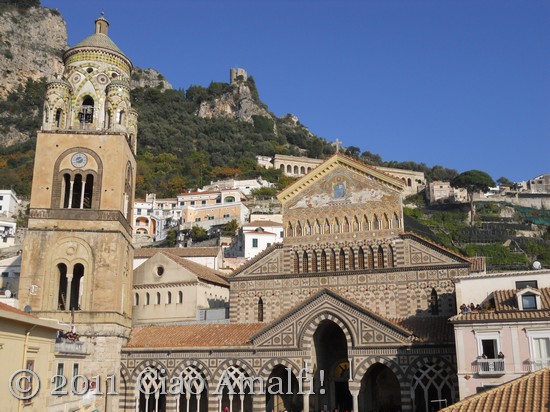 We weren’t the only ones waiting for this special moment in Amalfi. Every balcony and window was crowded with people looking down on the Piazza Duomo below and waiting for the final signal. 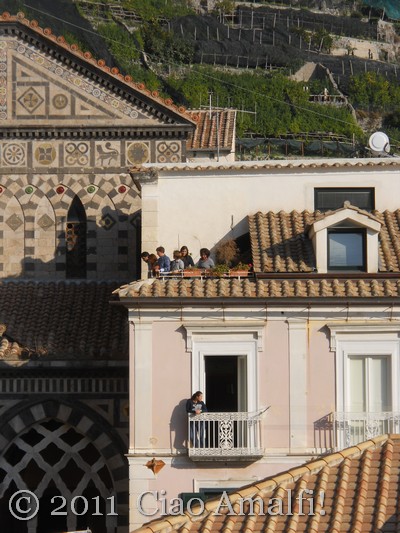 I could feel the time was near, and I switched by camera over from photo to video and got ready to capture the running of the statue. The applause begins as the group of men start the run, and bursts into cheers and whistles as they reach the top and turn the statue of Sant’ Andrea around again to face the crowd.

I never realize that I’ve been holding my breath until the statue reaches the top and I let it out with grateful relief. Another safe journey of the statue Sant’ Andrea through Amalfi, and now it will be safely returned to the church until next June 27th. 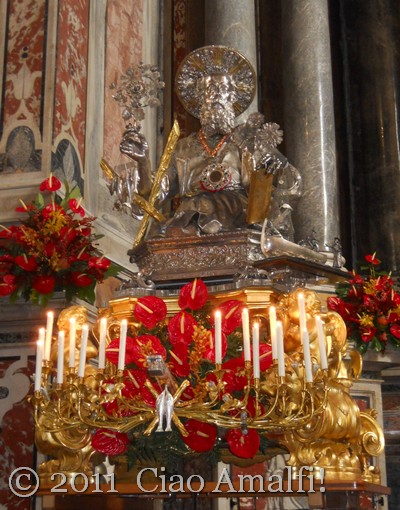 It’s traditional for the people of Amalfi to touch the statue of Sant’ Andrea before, during or after the religious procession. I stopped by the church after with my fiancé to carry on the tradition, just as the Amalfitans have done for centuries. Experiencing this religious festival is one of the highlights of each year for me in Amalfi. If your travels bring you to the Amalfi Coast in June or November, d0 come and join the Amalfitans in celebrating their patron saint and protector Sant’ Andrea! 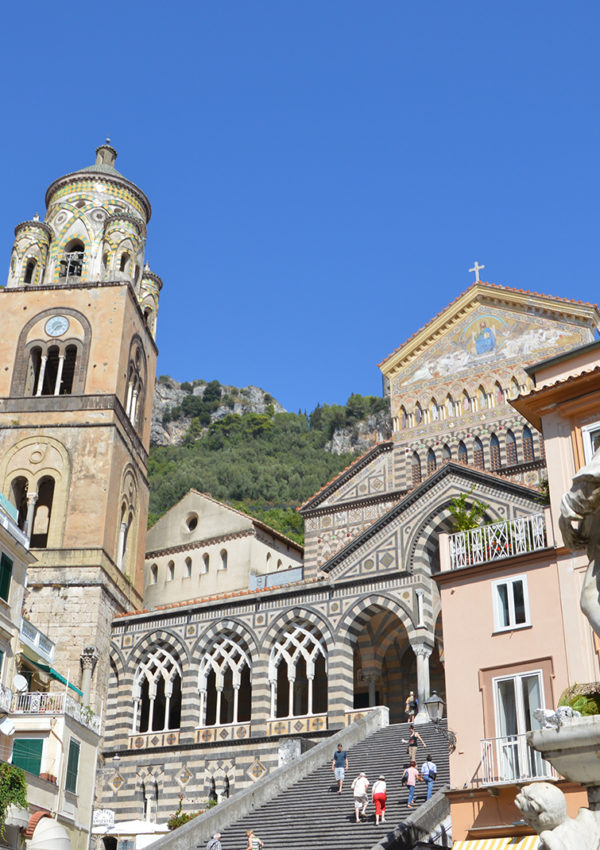 The Duomo of Amalfi Project