I have great news to share with those of you reading from the New York City area! My dear friend Chiara Lima from the Mamma Agata Cooking School on the Amalfi Coast in Ravello will be returning to your area on December 10th for an exciting event at Chelsea Market (75 Ninth Avenue, between 15th & 16th) in New York City for the launch of a fabulous new foodie magazine called Where Women Cook. Chiara will be there along with Ree Drummond (the Pioneer Woman) and many other famous cooks! Here’s a peek inside the first issue with a feature on the Mamma Agata Cooking School and Chiara’s lovely Simple and Genuine cookbook: 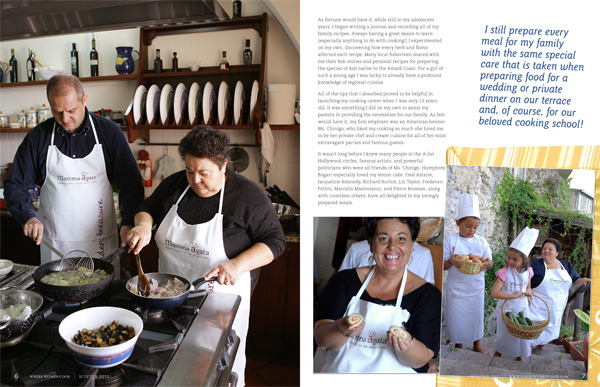 If you missed Chiara on her book tour last month, this is the perfect chance to meet her and pick up a signed copy of the first issue of Where Women Cook and Chiara’s beautiful Simple and Genuine cookbook. (A great holiday gift idea!!) Here are the details:

For a little sneak peek of what you’ll find inside Chiara’s Simple and Genuine cookbook, check out this wonderful guest appearance Chiara and her husband Gennaro did on ABC 7 News in Chicago where they prepare their Spaghetti del Contadino (Farmer’s Spaghetti). After watching the video yesterday morning I just had to make this quick, easy and delicious pasta dish for lunch. Enjoy!