With the Venice Film Festival under way and three big movies out in America – “Letters to Juliet,” “The American” and “Eat Pray Love” – all filmed in Italy, I thought it would be good timing to host a series of guest posts on Favorite Italian Films. I’ll be weighing in on some of my favorite flicks filmed right here on the Amalfi Coast as well. Kicking off the series is Lisa Fantino from Wanderlust Women writing about “Under the Tuscan Sun,” one of the all time great movies filmed in Tuscany … and the Amalfi Coast! 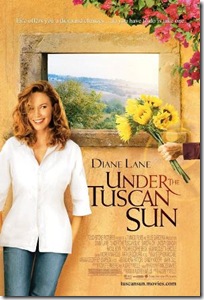 I first visited Tuscany in the shadow of “Frances Mayes Mania.” Her 1996 book, “Under the Tuscan Sun,” was bringing throngs of tourists by plane, train and automobile to the picturesque villages of Montepulciano and Cortona and the beaches of La Maremma. It seemed I was the only woman I knew who had not read her account of finding herself in Italy. I must say it was my last “group” tour. Hahahaha!

However, I also became enchanted by the land of golden hues and honey-colored sunsets, where the hills carry the perpetual scent of jasmine and the rustled brush of cinghialle (Tuscan wild boar). It is a land unlike any other. So, when the film based on Mayes’ book was released in 2003, I was one of the first to see it. I ran to the theater expecting to reminisce about my stay in La Toscana, about the quiet hillside for writing, about the beach which baked me in its warmth. Instead, I began a love affair with the Amalfi Coast, a geographic 180…..oh yeah, and Raoul Bova. (He is my celebrity boyfriend but don’t tell Clooney!)

The film stars Diane Lane as Mayes’ character, venturing to Italy on a pre-booked gay tour following a bad divorce. Right off I figured this would be campy and corny or entertaining. It was the latter, thank god. Lane’s character throws herself into renovating an ancient farmhouse. She is a hands-on homeowner and not a weekend warrior, so when she needs a chandelier, she ventures to Rome and happens into the arms of the gorgeous Bova, who immediately whisks her away to Positano.

By now I am sure you are thinking this can only happen in the movies and if you had only visited Tuscany then I would have to agree with you, having not been “hit on” once during my stay. I thought the Tuscan men were playing for the other team……..ahhhhh, but travel to Lazio and Campania and that’s where things get interesting very quickly. Men in the south are a lot more “approachable” for want of a better word. They don’t mind being approached and will readily approach you, so the happenstance between Lane and Bova’s characters is quite natural and just flows, as does the rest of the film.

The Tuscan hills and the Amalfi Coast, as well as the energy of Rome, all contribute to the plot as much as the storyline. It’s a film that highlights the warmth and passion of the Italian people, no matter whether from the north or the south, and it makes you feel good wherever you are in your life. I stopped counting how many times I’ve seen it after twelve.

Lisa Fantino is an award-winning journalist and attorney. She is the creative force and Italy travel consultant for Wanderlust Women Travel and the Amalfi Coast destination wedding site Wanderlust Weddings. She recently launched Amalfi Blu, gifts and jewelry inspired by the beauty of the Amalfi Coast. In her spare time, she also writes travel features for MNUI Travel Insurance and blogs as Lady Litigator.

Cookbook Review: Cooking Up an Italian Life by Sharon Sanders