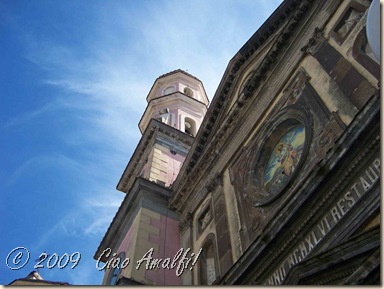 Vietri is the town I stayed in during my first visit to the Amalfi Coast, and I have since been back to spend days walking its streets, admiring the views and admiring a little too much the ceramic shops! It is a town that feels different from the rest of the Amalfi Coast, and that has always intrigued me. It is perhaps a bit more like its much larger neighbor Salerno. You feel less the impact of tourism when you walk the streets, and the genuine character of Vietri sul Mare comes through. I’ve shared some of the history and my favorite things to do in the Vietri sul Mare Travel Guide over at ItalyItalia.com. Pop on over to read about this charming town on the Amalfi Coast. 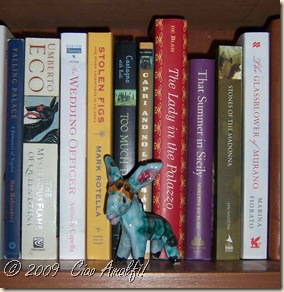 While there you can read about Vietri’s tradition of making “Il ciucciariello,” or the little green ceramic donkeys. Did you see those in ceramic and gift shops all over the Amalfi Coast? They started as a symbol of Vietri sul Mare when a German artist working in Vietri named Richard Dölker started making them in 1922. Nowadays you will seem them all over the Amalfi Coast. The little guy above came from my first trip to Vietri sul Mare. He traveled across the ocean to Minnesota where he made me smile, and now he is safely back to the Amalfi Coast where he keeps guard over my books. He still makes me smile!

Learn All About Italy’s Olive Oil
Spreading the Love: Saponissimo in Positano
Ciao Amalfi is a Blogging from the Boot Finalist!