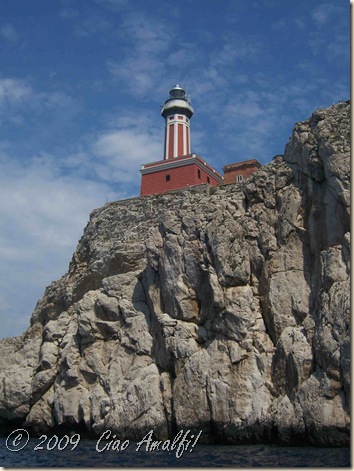 Last month when I went on a boat tour around Capri, one real treat was seeing the Faro (lighthouse) on Punta Carena for the first time. The second most important and powerful lighthouse in Italy, it is a striking pink and white striped structure placed on a promontory shaped like the keep of a ship (carena means keel). Tucked in a small cove next to the lighthouse, I saw what looked like a spectacular swimming spot. I said to my boyfriend, “I want to go swimming there someday!” 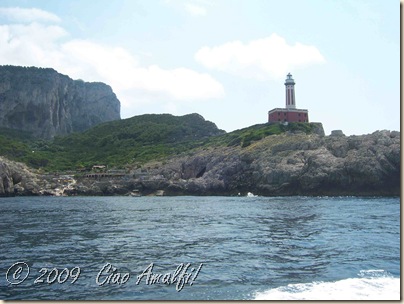 It turns out that “someday” wasn’t far to come, because earlier this month we went back to Capri for the day. There was talk of swimming at the Faro, and the locals we talked to in order to get directions unanimously declared it the most beautiful swimming spot on Capri. So off we went! On the way I didn’t quite focus on the fact that Faro meant lighthouse and that we were going swimming right where I had wanted to go! It wasn’t until we climbed off the little orange city bus that took us from Anacapri down to the secluded lighthouse area that I knew where we were. 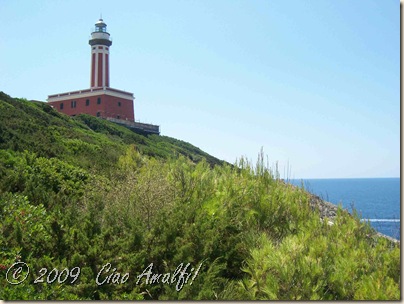 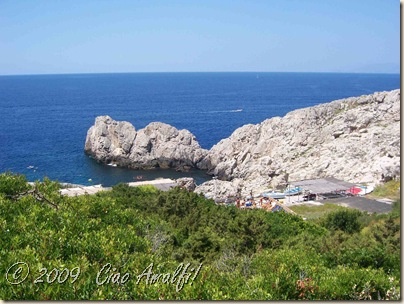 And, yes, it was indeed spectacular! Here is a slideshow of some of the photos photos I took during our afternoon at Lido Il Faro:

It was very crowded, but that’s normal for Capri in August. Next time we’ll go in June or July. But the water was incredibly beautiful and the landscape one of the most amazing I have seen for swimming. One thing to be aware of is that there is no beach here, which would make it a challenging spot for families with young children. The are some ladders you can used to climb in, but most people just made some sort of big splash jumping in.

From the center of Anacapri, hop on one of the local orange buses marked “Il Faro.” The buses run about every 20 minutes in the summer and every 40 minutes in the winter, and you buy your ticket on the bus. It takes a 10-15 minutes to go from Anacapri down a narrow, winding road to the final stop. Get off at the parking lot and follow the locals down the steps to the swimming area. You can pay for sun beds and to use the beautiful facilities (including a pool) at Lido del Faro, or just throw your towel down on the rocks like many people do. Either way you will have a grand day!

Happy Hour and the Bells of San Benedetto in Amalfi