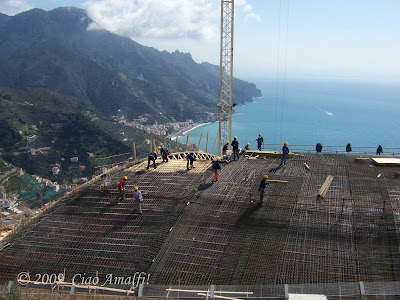 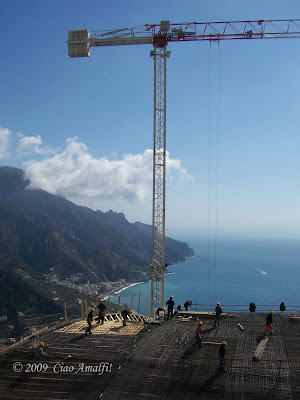 Continuing with la città della musica, as Ravello is called here on the Amalfi Coast, I have been watching the construction of the city’s new Auditorium Oscar Niemeyer over the past many months. While the city has matchless outdoor venues, such as the Villa Rufolo, Villa Cimbrone and the Piazza Duomo, it has relatively limited seating for concerts during bad weather and the winter months. And while Ravello certainly doesn’t suffer from a shortage of hotels, the city also hopes to attract more conferences, seminars and conventions with the new auditorium space. 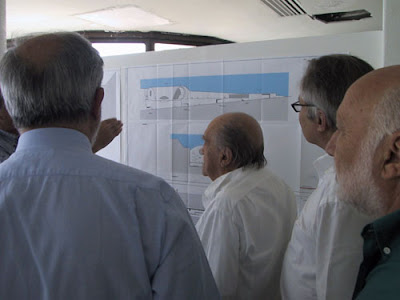 Through what the Ravello Festival has described as “a series of fortunate circumstances,” the city of Ravello was able to work with the renowned Brazilian architect Oscar Niemeyer. (Now there must be a good story there!) If Niemeyer’s name doesn’t ring any bells, he one of the most important names in international architecture, and he is perhaps most well-known for his work on the United Nations building in New York with Le Corbusier and his role as principal architect for the design of Brazil’s capital city Brasìlia. With a big name and a wealth of experience garnered from designing over 500 buildings around the world, Niemeyer was a good catch for Ravello.

But why Niemeyer? The Ravello Festival website describes the connection as:

“the intimate alliance that exists between his style and the local one. Throughout the Amalfi coast, as in Niemeyer’s architecture, it is the curve and the colour white which predominate. His architecture is grounded in that solar culture – bold and measured at the same time…” 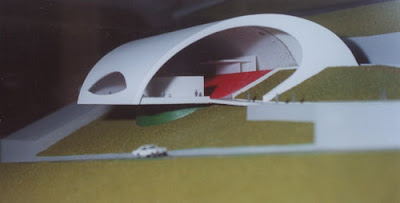 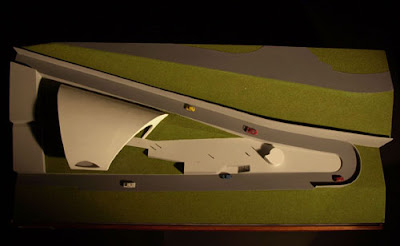 What do you think? Can you sense anything of the local Mediterranean style in Niemeyer’s design? I have to admit I am intrigued, and certainly won’t be casting any opinions until it is finished. The question of designing a new auditorium for Ravello is certainly a sticky one. What piece of modern architecture could ever fit into to medieval beauty of Ravello? Is it possible to pull this off successfully? If you have doubts, you certainly wouldn’t be alone. Niemeyer completed his design for this project back in 2000, and it took six years of battle before the building was approved and the first stone was laid. This is understandable in part because of the Amalfi Coast’s status as a UNESCO World Heritage Site. This makes it challenging to renovate your house and change your windows or add a balcony, let alone build an auditorium! 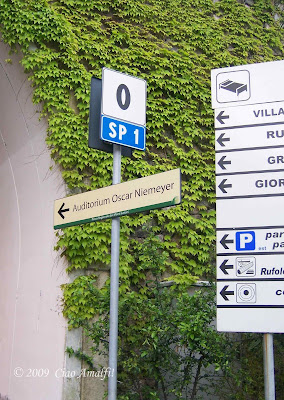 The word on the street here is that the auditorium was supposed to be open for the Ravello Festival this year. I am not sure if they will make it, but I can say the workers are giving it their best! The new signs for the Auditorium Oscar Niemeyer are up around the city, and the workers are busy every day. Here are a couple of shots from last weekend: 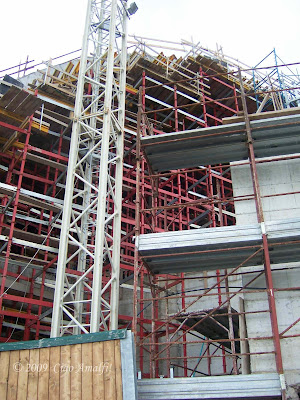 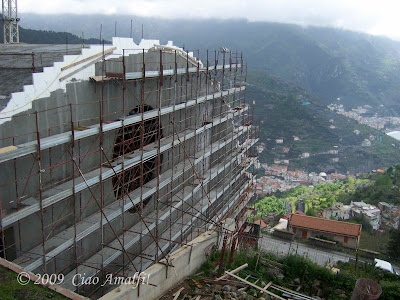 See more photographs and read about the auditorium at the Auditorium Oscar Niemeyer website and the Ravello Festival website.