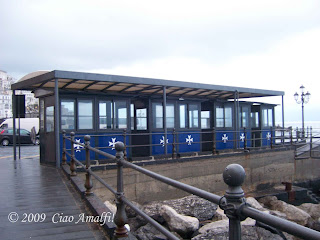 I was greeted in Amalfi the other evening by a row of new ticket booths for boat tours and the boats that run between the cities on the Amalfi Coast and to the islands. While they are certainly all fancy and orderly, I really don’t care for them at all. Where the old wooden booths with their different shapes and colorful posters had character, this standardized row of booths has about as much character as a row of canned vegetables in the supermercato. They could put twenty Amalfi crosses on each one and I still wouldn’t be impressed. They also block a nice view of the port in their new location. Can you just imagine sitting inside one of those glass booths on a good and hot summer day in Amalfi? Toasty. I fear the little windows they are equipped with just aren’t going to cut it. While I am generally positive about improvements, such as the new sign in Piazza Flavio Gioia that says how many parking spots are available down at the end of the port (genius!), these new booths served as a reminder for me that not all progress is improvement.