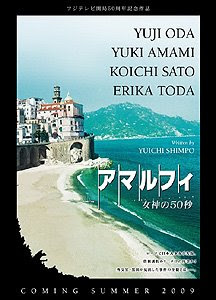 Aha! With some searching last night, I found the movie being filmed on the Amalfi Coast right now. It is called Amalfi: Megami No 50-Byou (Amalfi: 50 Seconds of a Goddess), and will be the first film shot entirely on location in Italy. Here is a great little article about the movie, which states that filming started mid December and will wrap up by the end of February. According to this site, it is expected to be one of the blockbuster hits for summer 2009 in Japan. Curious what it is about? It is a suspense movie starring Yuji Oda (“Japan’s answer to Tom Cruise…”) as “a foreign diplomat relegated to the coastal town of Amalfi who investigates the case of a young Japanese girl kidnapped off the streets of Rome at Christmas, eventually falling in love with the girl’s mother.” Relegated to the coastal town of Amalfi? Poor guy. Hah! I would like to see the movie someday just to see the local sites on film. Here is the official website, if you happen to read Japanese.

Have any of you local readers seen the movie being filmed?

A Night of Music & Magic in Scala
Tempting Tuesday: Touring Around Capri by Boat
Buon Ferragosto!